What Is Wrong With This House? 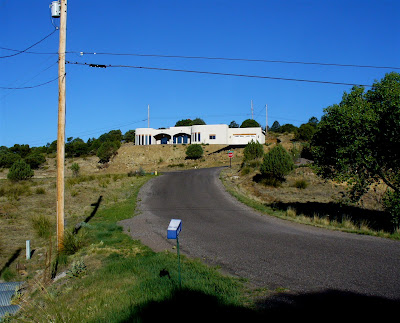 We are currently in the Silver City, New Mexico area
and just down the street from where we are staying
is this seemingly empty but very new house
in the county just outside the city limits.
So far we have not seen anybody in or around this house.
We don't know if it a foreclosure or what.
There is no for sale sign and it just seems
to have been sitting empty for quite awhile.

This is a beautiful area that has been carved up into relatively large lots
that are on septic but served by the city water system.
So what's wrong with this? And why has it happened across the country?
First this is very wasteful of land and services.
With all of the houses spread out it is more costly to provide
water, trash pickup, mail, and fire and police protection.
Not to mention the extra fuel to carry everybody around.
There is really no where to walk other than for walking the dog;
no stores or shops.
And bicycling to town is not convenient, even dangerous,
because of a lack of trails or bike lanes. 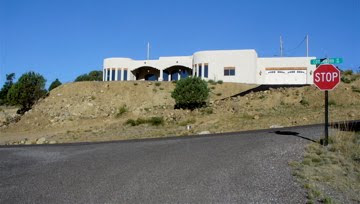 The house itself has a flat roof which for me defies all reason.
There is no roof overhang to shade the walls from the hot summer sun
which increases cooling costs and there is less protection from rain.
At some point the stucco will crack letting water run down into the walls.
The house will start to deteriorate and mold will start to grow.


And why? Builders love them because they are cheap and easy.
And buyers love the Santa Fe style. 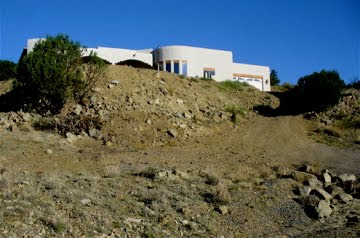 Somebody took plans for a large rambling house ( more waste )
and tried to put them onto a lot on a steep hillside.
They cut into the hill and dumped the dirt out front.


Were the soils tested? Were they compacted?
Is there a tendency for them to slide when saturated with rain or snow?
And what about the erosion from the runoff created by the large roof area
and the hardscaping around the house, as well as the steep bank out front.


Oh, what about this silly steep driveway. 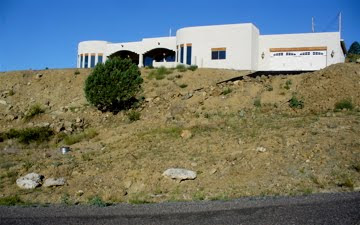 Cities and counties love these developments because they increase
the tax base, they keep the developers wealthy enough
to keep the campaign contributions coming,
and they provide lots of jobs ( more tax revenues ).


The zoning and planning regulations are set up to aid
these kind of developments and the developers who build them.


The real cost won't show up till much later when the marginal roads
start to crumble, curb gutter and sidewalk are needed,
sewer lines are extended,
and fuel costs go up all to be paid for by the taxpayer. 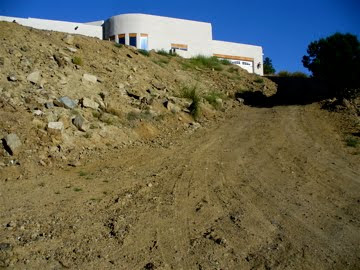 To a large extent the party is over.


Many developers have filed for bankruptcy and many homes
are in foreclosure brought on by the weight of debt.
Other homes are not worth the amount of the mortgage
covering them and there are fewer potential buyers with jobs.
It may be a very long time indeed before we see a strong real estate market.
And it all rests on a failed energy policy that is dominated by wars
in the Middle East and dumping oil into the Gulf of Mexico.


The point of all of this is to add to the debate of what we want
in our communities and were we are going as a country.
Posted by Ches at 1:38 PM