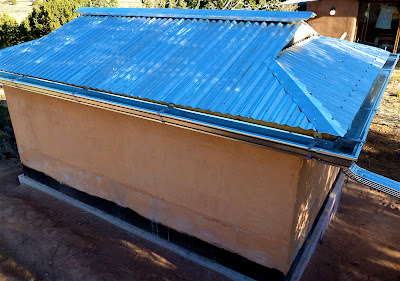 This is the 5th post on our well house project
and we will take a look at the corrugated galvanized metal roof. 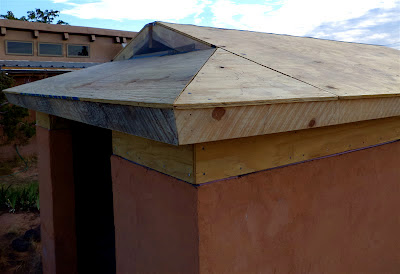 In the last post we got as far as the plywood sheathing on the roof
and above you can see we have added the rough cut 1"x4" fascia.

I like the look of the rough cut wood (lightly sanded)
as it is thicker than the 3/4" nominal 1x4 it is also stronger
and because it is wider than the nominal 1x4 it gives a nice revel over the 2x4 rafter ends.

Plus it is lumber that I can by locally, from locals who employ locals,
so I use it whenever I can.

In the previous post,  Building A Well House #4: Framing The Hip Roof,
I talked about the different treatments  for the end cuts of the rafter tail,
and the photos above and below show the look of a square end cut
(as compared to a plumb cut). 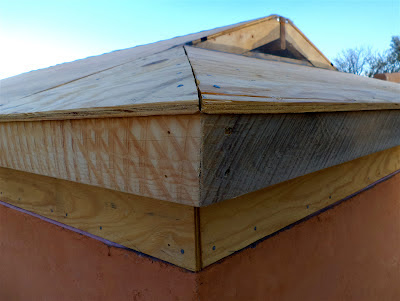 Unfortunately the fascia (above) mostly gets covered up by the gutter.

Also note the gap of close to an 1/8" between the pieces of plywood for expansion.

I never use a soffit as they tend to always be trouble over time
from water damage, birds nesting, or just the effect of gravity eventually loosening it up.

Instead of a soffit the final outside finish (stucco) will extend between the rafters
and up to the roof sheathing leaving exposed rafter tails and the fascia. 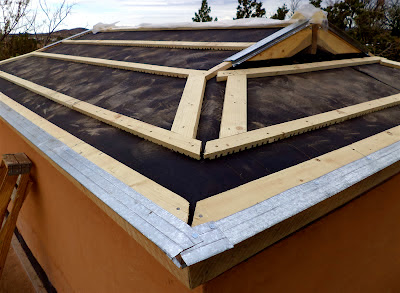 Above you can see the 15# roofing felt has been put down,
the purlins have been added, and the drip edge is on,
we are ready for the corrugated  metal.

Note that I have cross cut holes on the bottom of the purlins
to allow any water that gets in to drain away easily.

The diagonal pieces along the short hip ridge are for screwing the flashing to. 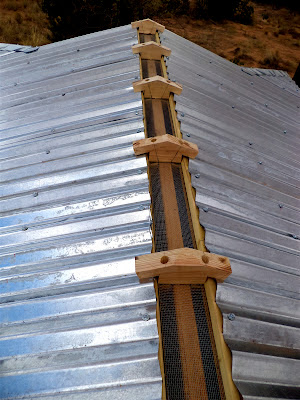 Above you can see the metal is on and I have installed blocking for the ridge vent,
having screwed the blocks into ridge beam where the rafters connect.

The 1/8"  screening to keep out bugs, birds, and rodents was installed in the last post
when we looked at the framing and sheathing. 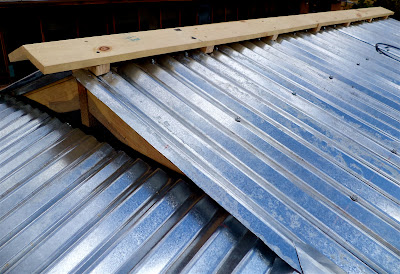 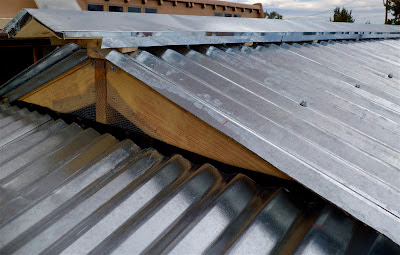 ...and on top of that I installed 12" wide sheet metal
with a drip edge that I bent on my workbench,
fastening the whole thing with screws under the drip edge.

Bending sheet metal without a bending brake is difficult and an acquired skill,
maybe not for everybody, but  with some very straight boards as guides is doable.

I really didn't allow enough overhang of the ridge vent over the roof metal
but I think it will be okay;
planning is everything and as hard as I try miscalculations will occur. 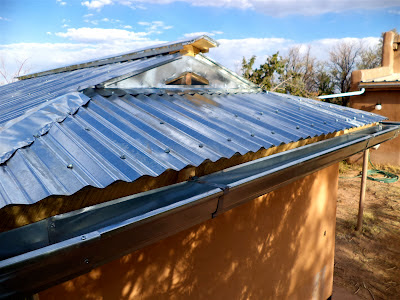 For the gable end vent (above) I already had stapled on the 1/8" screen in the last post
so first I added the flashing over the the metal roofing... 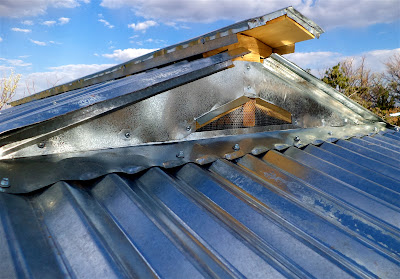 ...and then added the sheet metal over the rafters at the gable
using #6 x 1/2" pan head metal screws,
and bending a flap over the opening.

The problem with such a small roof is the actual vent area is not very large
but with the ridge vent there should be plenty of air exchange.

I use a hammer to bend the edge of the flashing down to meet the corrugations.

The flashing is not the most beautiful thing but hopefully will do the job. 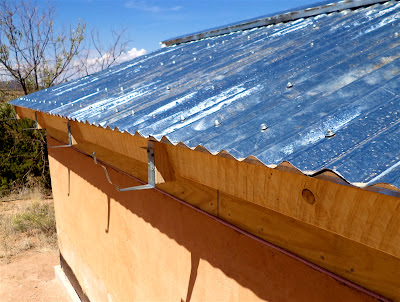 Before I get too far ahead I want to mention the roof metal.

I like corrugated galvanized metal as it long lasting, inexpensive,
relatively easy to install, used all over the known world, and I like the look of galvanized;
but it is not for everybody.

Some tips for installation are:
- do not use on less than a 3" in 12" pitch, preferably not less than a 4 in 12 pitch,
- use a 29 gauge metal or thicker not the very wimpy 31 gauge,
- check your layout before installing so you know how your last piece will fit,
and mark where each piece will go to keep things
straight and square as you work,
- except for steeper pitches always over lap the pieces two ridges
to keep wind blown rain from getting through,
- use screws with rubber washers, not nails, to install,
- and put them on the ridges not the easier valleys,
(this last point is debated by professional installers over and over),
- lastly for a cleaner look determine your fastening schedule before you start.

And finally the reason I use the purlins
instead of installing the metal directly on the felt paper is to allow for air circulation
on the bottom of the metal which gets very wet from condensation in the winter
and will allow rust to develop on the underside shortening the life of the roof.

I have gone into attic spaces in the winter
and every time when I touched the underside of the metal roof my hand gets very wet.

Now let's look at the gutters
and in the photos above and below you can see I have installed the metal gutter brackets
over the wood blocks I have screwed into the fascia at the rafter tails. 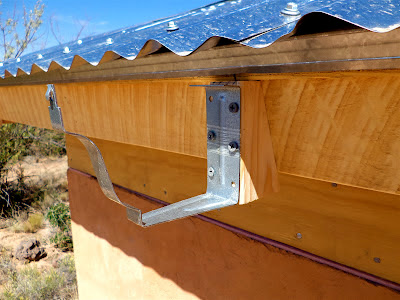 As you install the brackets use a string line to position the brackets
so you have enough slope so the water will flow to the downspout.

Of course more slope is better
but very little is actually needed for a positive flow.

I generally set the brackets at the ends of each run with the slope I want
and stretch a string line between them to position the others in between.

Place your brackets no more than about 3' apart. 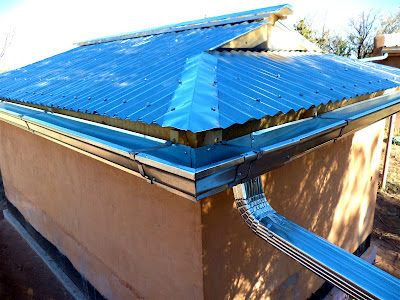 Above you can see the finished gutter and the 10' gutter sections are screwed together,
though rivets would work quite well;
and also note the flashing over the hip ridge
(you may remember above how I installed the purlins to screw the flashing to).

I use a clear or grey silicon caulk formulated for metal before I lap the sections of gutter
and screw them together with #6 x 1/2" pan head metal screws (3 to each connection)
using at least 1 1/2" to 2" overlap of the sections
(if I was better at soldering that would be way better than silicon).

In my world I never want to see water coming off a roof
and saturating the ground around the building;
gutters are a must on any roof
except maybe where snow loads could rip off the gutters.

Water infiltration is one of the main determinants of how long a building will last,
and in many parts of the world that water can be put to good use. 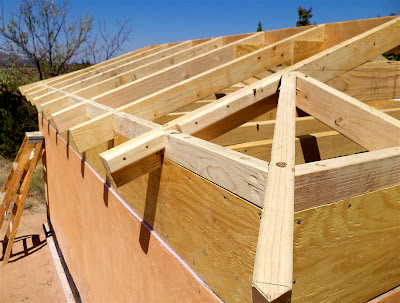 As a refresher compare these last two photos taken from the same vantage.