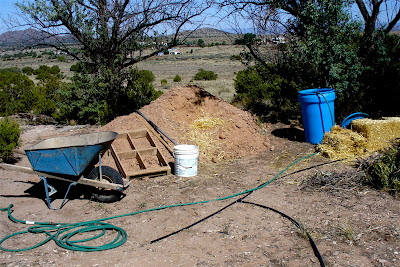 It is (was) June in the southwestern USA and as is typical it is hot and very dry-
what better time to make adobe bricks because they also like it hot and dry.

I had a pile of adobe dirt that I wanted to get rid of
and knew I would need these bricks for a future project.

As you can see above the ingredients for making adobes are:
-a pile of good adobe soil
(sift your soil only if it has stones larger than about 2" or lots of debris),
-a form for the bricks,
-straw for mixing in with the dirt,
-water, a water barrel and a 5 gal. bucket,
-a very sturdy wheelbarrow,
-and a shovel, hoe, and trowels. 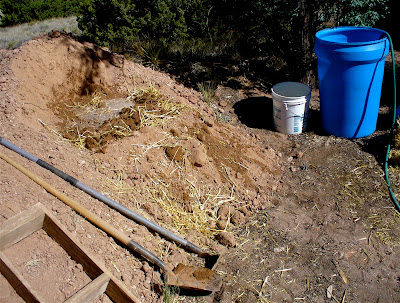 I start by making a pit on the side of the pile about half way up.

When I was younger I put the pit in the ground but that is too much stooping over
and this way you can easily push dirt into the pit
and the resulting mud is closer to wheelbarrow height.

I learned this by watching some young guys from Mexico
making bricks in our neighbors yard many years ago;
most of what I know comes from imitation.

As you can see above once I form a pit I add straw and water,
then the dirt.

The amount of straw is personal taste and experience,
but I tend to use more than less. 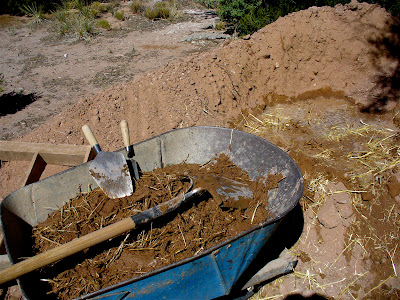 You will notice above I have a margin trowel
and a mason's trowel with the point cut off.

The margin trowel is for pushing the mud into the forms
and the "pointless" trowel is great for cleaning buckets and wheelbarrows out,
one of my favorite all time mason's tools. 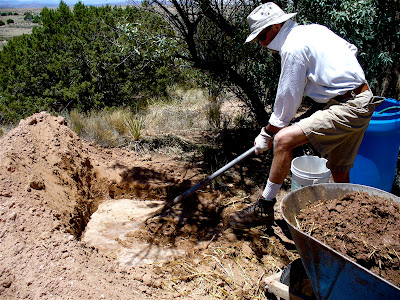 Once I get a load in the wheelbarrow I immediately start another load so it can be soaking.

This is especially helpful if your soil is lumpy.

I find it much easier to fill a 30 gallon water barrel
and use a five gallon bucket to fill the pit,
so I am not standing around holding a hose,
or letting the hose run on the ground,
and I can measure the water.

You will also notice above that I am well covered from the intense June sun
with a white thrift store shirt and a big hat,
good boots on, and work gloves.

This is incredibly hard work and it helps to dress for success. 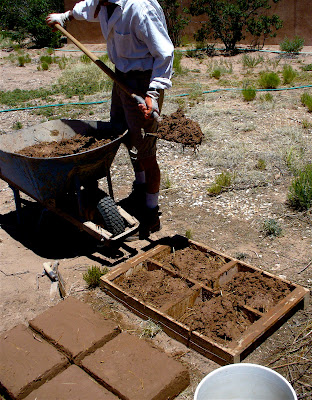 I made the form years ago from recycled door jambs and scrap lumber.

I have seen one, two, and three brick forms
but I like the four brick form myself.

I shovel the mud in with a bit of force to start packing it (above)... 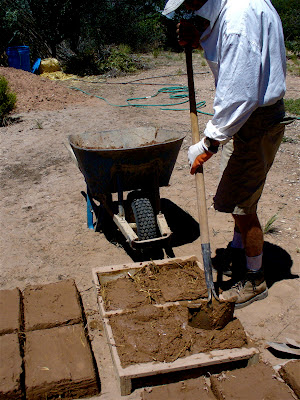 ...and use the shovel to pack it some more.

You want your mud mix to be fairly stiff which makes everything harder,
from the mixing to the shoveling. 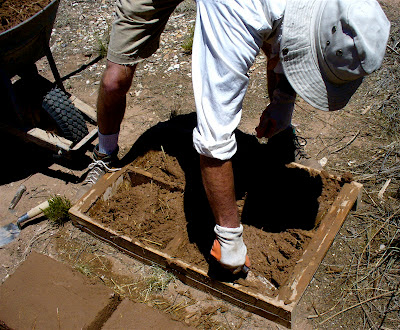 I use the margin trowel to pack the mud into the corners of the form.

This is very important, as the mud sticks together best from compression,
so work it in real good. 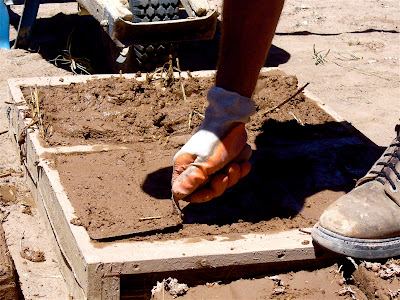 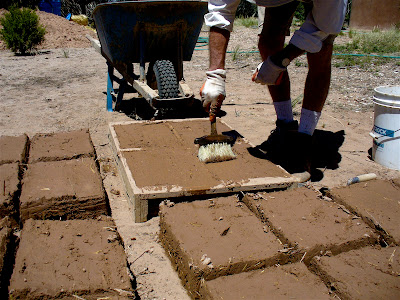 ...then I like to smooth the top of the bricks with a wet mason's brush,
(note the 5 gal. bucket on the right, above, which has water in it.) 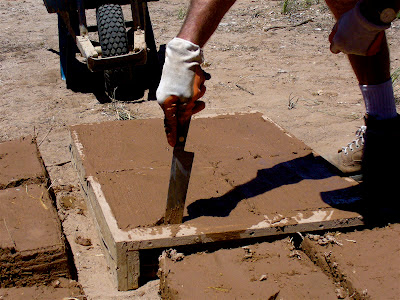 Then I take an old yard sale knife and cut around the edges
to make it easier to lift the form off.

Some people line the form with sheet metal instead
to make it easier to pull the form off,
though I have not tried that. 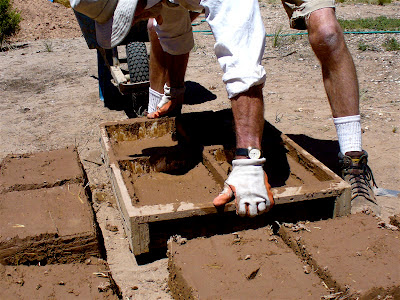 I tried wiggling the form off for awhile
but found that just pulling it up quickly worked better. 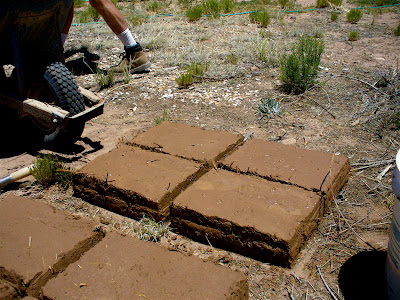 And there you have your bricks. 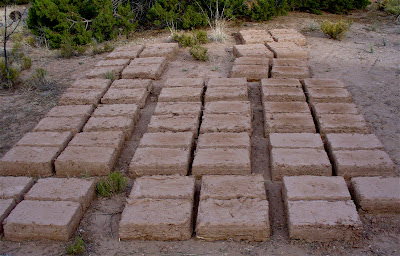 This is where the hot and dry comes in
as hopefully the tops of your bricks will dry by the next day or two... 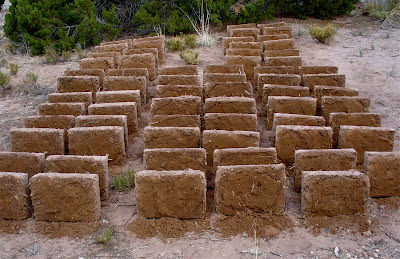 ...when you can tip them up to dry on the bottom (above).

Watch the weather for rain as that could ruin your hard work;
now you can see why hot and dry weather is best. 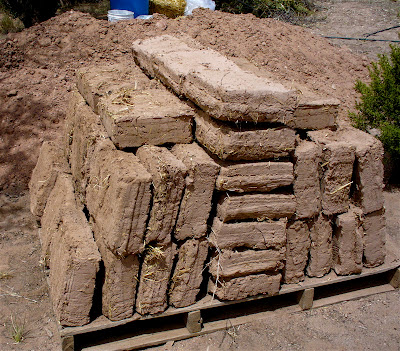 I like to use pallets to stack the bricks after the initial drying.

-plan your dirt and where you stack your bricks
to be as close as possible to where you will use them,
as each time you pick up and move a brick the work load magnifies;

-making you own bricks on site is a cost effective material for the owner builder,
whereas transporting bricks from a supplier
sends the cost out of reach for the average person.

To see some real pros making adobe bricks see my post:
Making Adobe Bricks In Patzcuaro, Michoacan,
and to see much more on adobe go to the right sidebar and look under
LABELS- ADOBE AND BRICK.