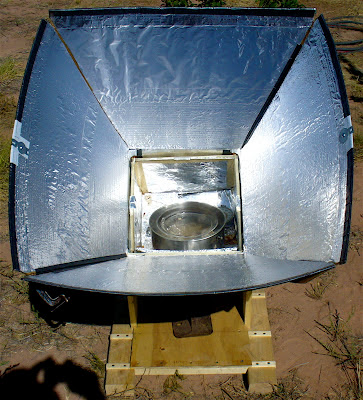 For many years Allison has wanted a solar oven
and we finally got around to building one out of cardboard
to serve as an experiment, prototype, and a pattern for a permanent oven.

(Our latest post on our new and improved oven is:
Make Your Own Solar Oven- A New Improved Oven) 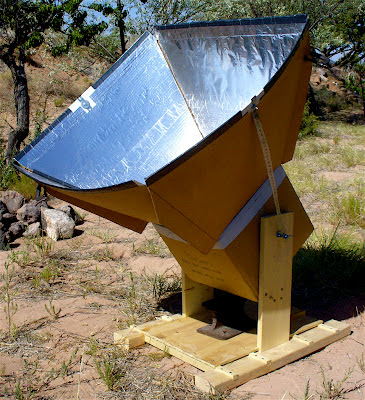 The cooking box and reflectors are made from cardboard,
from plans we found in an internet search,
and come from a 1994 issue of Backwoods Home Magazine
titled Making And Using A Solar Cooker by Joe Radabaugh.

The reflectors are from large cardboard pieces we had,
and are cut pretty close to the plans,
and two of the intersecting flaps you see above are glued with wood glue,
which worked great,
while the other two are temporarily clamped with 2" C clamps for easy disassembly.

Allison patiently and carefully glued aluminum foil to the reflectors
with watered down wood glue,
which despite my doubts worked pretty good. 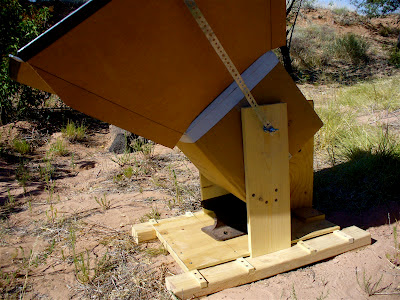 The box is actually two boxes nested together
with any extra space filled with cardboard or other insulating material,
and the inside of the oven is lined with foil.

The plans linked to above give much better instructions,
so please refer to them.

We wrapped exposed edges of cardboard and foil
with a high quality duct tape. 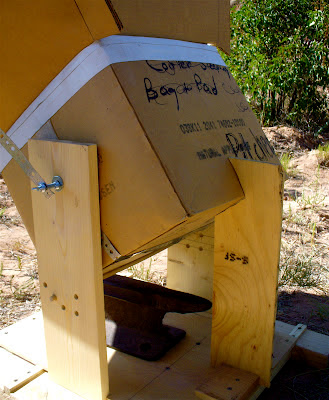 The wood base also evolved to hold the box at an angle
and to keep everything from blowing away.

If you notice the dowel and holes in the vertical wood support,
they provide different angles for the box depending on the angle of the sun.

Another afterthought is the plywood up right at the rear of the box
to hold the box from falling back,
which also means the angle is not changed easily.

The plywood base is to put weight on the whole assembly,
such as the small anvil above or rocks,
to keep the wind from blowing everything away. 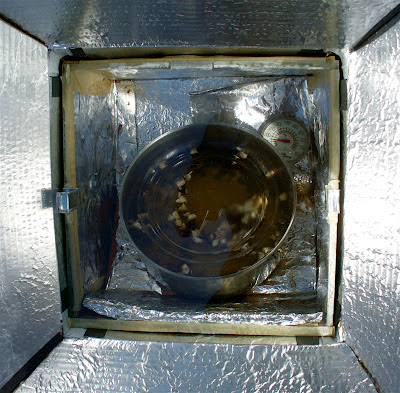 Above we see into the box oven as we cook a pot of rice
in the morning just after setting everything up,
with a $5 piece of double strength glass as the cover,

What we learned so far:

-The glass cover is hard to edge and make tabs for removing,
our masking tape edges peeled off from the heat,
and Allison made the friction fit metal tabs you may notice above
to carefully grab the glass with.

-Some kind of swivel system would be nice
to turn the oven more easily to the sun such as a lazy susan.

-Since the box sits at an angle,
figuring a stable shelf that allows enough room for the pot on the inside
has presented a challenge especially if we want to change the angle of the box.

-The base and duct strap holding the reflectors has worked great
against our relatively high winds (30 mph+/- gusts).

-Depending on what is in the oven,
our highest temperatures so far are 325 degrees
though 250 - 300 is more common.

-Think of a solar oven as a slow cooker,
cooking times are generally longer.

-So far we have successfully cooked
potatoes, garbanzo beans, chicken, and rice.

-We have had trouble finding the perfect pot to cook in,
above shows Revere Ware soup pot with the handles removed
and a glass plate for a lid,
although a dark enamel pot with a glass lid would be best
(glass lets you see how things are cooking without opening).

Other options are glass or ceramic ovenware,
although something lighter (weight wise) heats the food better,
and a dark pot would absorb more rays and heat from the sun.

Also the 1992 book, Cooking With The Sun (Morning Sun Press)
by Beth and Dan Halacy
has directions for building a more substantial and permanent cooker
as well as recipes gathered from many years of experience.

Our latest post on our new and improved oven is:
Make Your Own Solar Oven- A New Improved Oven
Posted by Ches at 3:53 PM