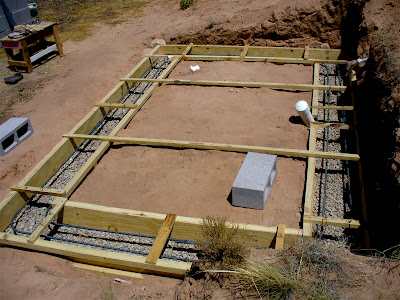 This post is the first in a series
for a 80" x 128", dry stack cement block, solar heated, well house we are building
and will highlight several out of the norm methods of building.

Here we will look at the rubble fill foundation
in which the footer sits on top of a foundation of rubble
and various size stone aggregate.

The above photo shows the form work ready for the concrete footer
which is at the top of the foundation instead of at the bottom of the trench. 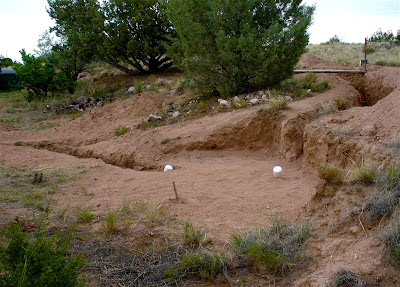 But first let's back up and look at the project from the beginning.

In the photo above the well is at the end of the trench
going to the upper right hand corner where you can just barely see the well
right behind a faint orange colored hydrant.

The trench on the left goes to the house, about 30' away.

The well was dug almost 30 years ago
and has a pressure tank that is buried next to it.

A buried pressure tank ranks right up there with the flat roof as a really dumb idea,
(my point of view) and instead of the more common (in this area) well pit,
a 6' culvert buried about 6' into the ground next to the well,
we opted for a walk in well house, the cadillac option.

The well house will also be incorporated into a privacy wall
and wind break to help create a courtyard next to the house. 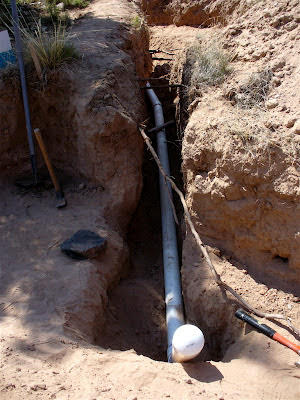 This fixer upper house being new to us
and having no record of where the water lines ran,
our first task was to hand dig the 3' deep trenches to find the water lines,
and then dig short connecting trenches to the proposed well house.

Since we wanted to replace all the water lines after the well house was completed
we placed 3" PVC pipe in the trench at 3' deep (standard in this area)
as a conduit for the new PEX water lines.

My first choice was 3" ABS waste line for the water line conduit,
but the cost was almost twice as much as the white PVC water and waste line we used,
but next time I would consider the 3" grey PVC electrical conduit as it is much more flexible.

I try to limit my use of PVC because of the toxic nature of the material
but in this case I felt the usage warranted the material.

I am a big believer in conduit for water lines (as well as for electrical)
when the distances are short enough,
as things can be replaced and up graded in the future
without ever having to dig again. 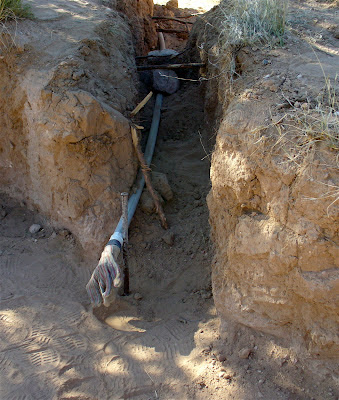 At 18" deep we put in conduit for the electrical (per code). 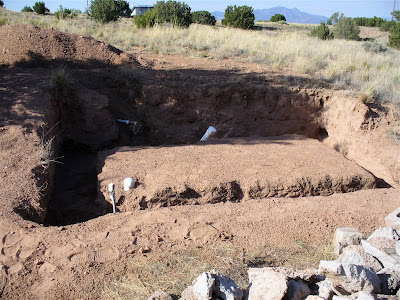 After the conduit is in (which are capped and taped to keep dirt out),
we could dig the footers 2' deep (as is standard here) by 18" wide.

Because the well house is built into an embankment
the trench along the cut is about 6" deep giving us plenty of freeze protection. 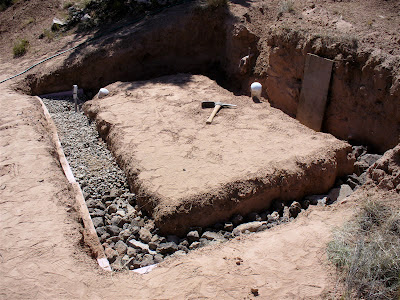 We then filled the trench with rubble and 2" of XPS foam board,
also referred to as pink board, blue board, grey board, take your pick.

In this case our rubble was stone and broken up pieces of concrete
left around the house from when it was first built,
and the last couple of inches was 3/4" gravel
to make it easier to level the forms.

The rubble packs in much better if you mix various sizes
ending with the smallest size on the top,
making sure to pack it in well. 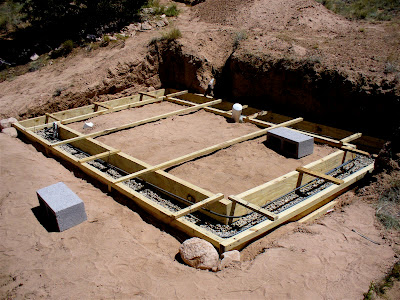 As is standard, we ran two strands of 1/2" rebar around the foundation.

We chose cement block with 2" XPS foam insulation on the outside
because part of the wall is below grade,
and being a well house there is always the threat of moisture buildup inside;
and also since we wanted to passively heat the well house with a Trombe wall,
the mass of the masonry wall becomes a heat sink for the solar collector.

Insulated concrete forms would also be a good choice except for the solar application. 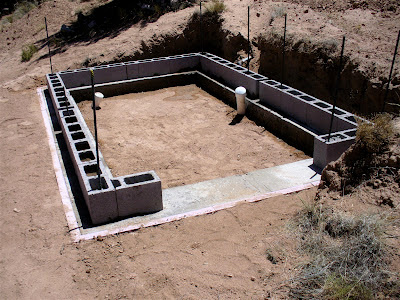 Another unusual technique of mine is to set a course of block
in the wet concrete as we pour the footer,
which works well with dry stack cement block.

I recommend this only to people with lots of experience with concrete and block
as timing and preparation are everything
and keeping the block straight and level is difficult at best;
oh what a mess it would be if things got out of hand
(the small size of this project gave us an edge).

It is necessary to let the concrete set up to the perfect point
so that the block will bond but not sink into the footer,
and then string lines must be set up to keep the wall straight;
not easy in the rush of a pour.

We had sand and gravel delivered and did all our mixing in a wheel barrow
carefully measuring 1 cement to 2 sand to 3 gravel;
with just Allison and I working it was quite a workout. 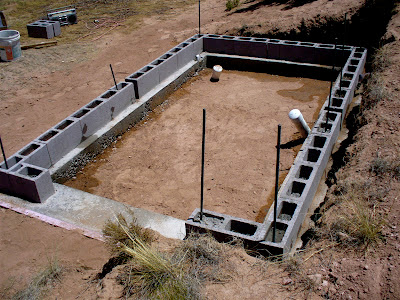 Always check with your local building officials as you plan and execute your project,
particularly if you follow ideas from some knucklehead  on the internet. 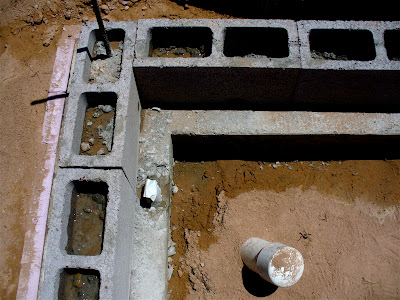 After the blocks are placed we pushed the vertical rebar into the footer
and filled the cores about half way up with concrete
to give a good bond with the footer.

In the next post we will look at dry stack cement block
using a surface bonding cement in the post:
Building A Well House #2: Dry Stack Cement Block .