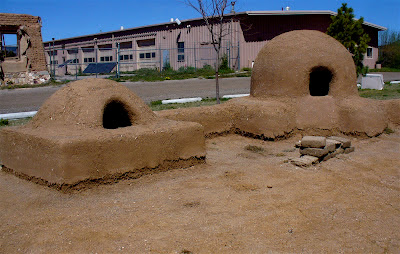 We were on the El Rito campus of the Northern New Mexico College back in the spring
and I got some photos of the hornos that had been built
by the Adobe Construction Program there.

Having gotten much interest in the recent post-
Wood Fired Ovens In Baja California Sur,
I thought these ovens would be a nice contrast.

The above photo shows two contrasting styles-
the traditional one on the right that is found all over northern New Mexico
and on the left the smaller, lower type that requires less wood to heat up. 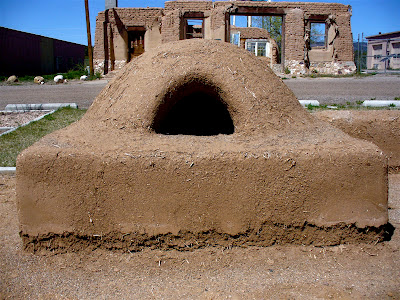 Root Simple recently did a great post,  Our New Earth Oven And How We Built It
on a workshop conducted by Kurt Gardella on how to build a sand cast horno
using sand to form the inside space and then once completed the sand is scraped out.

The sand allows for a much lower profile and is built with clay mud. 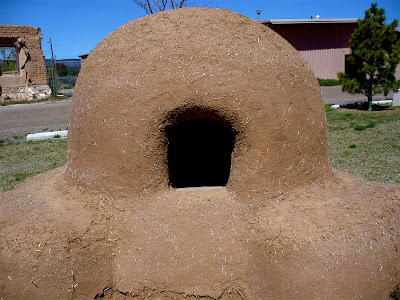 The traditional style, above, is made from adobe bricks
that are laid up to form a type of dome.

Regular 4"x10"x14" bricks can be used or in some cases angled bricks
that are shaped to fit in a circular pattern to create the dome are used.

I am not sure of the regional origins of this type of horno,
but I would normally think it would date from Native Americans from the local pueblos
and was then adopted by the early Spanish settlers;
but Wikipedia states that it comes from the Moors when they occupied the Iberian Peninsula,
picked up by the Spanish
and exported to the "new world",
which is the case with so much of adobe technology. 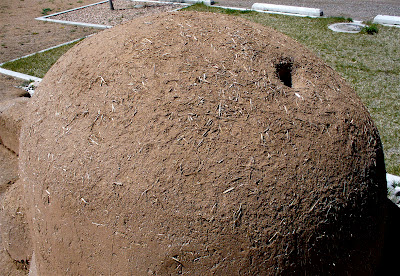 On the back side is the smoke vent. 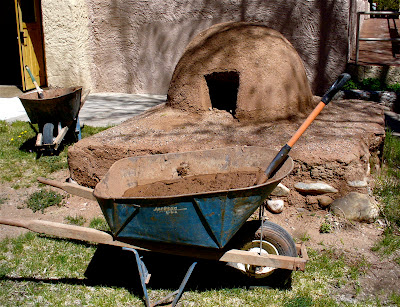 The above horno is ready for replastering,
though I would prefer a simple shed style metal roof
to protect the adobe from the elements. 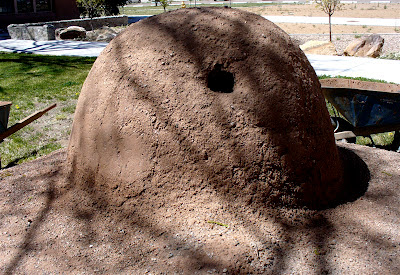 The location of the smoke vent seems to vary,
even to the point of not having one at all. 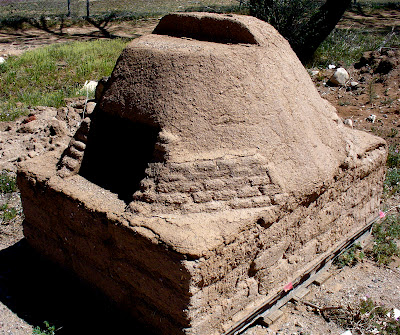 The above horno is a bit stylized and you may notice that it rests on a pallet,
not standard,
but for instructional purposes it is probably nice
to be able to move it around (with a forklift presumably). 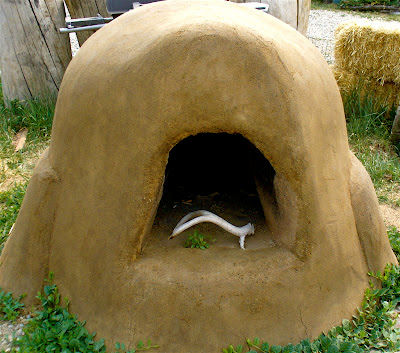 These last two photos come from the post- Wood Ovens And Hornos.

Above is from Arroyo Seco, New Mexico, near Taos,
and in contrast to the others shown here which have adobe plaster ,
it has a cement stucco. 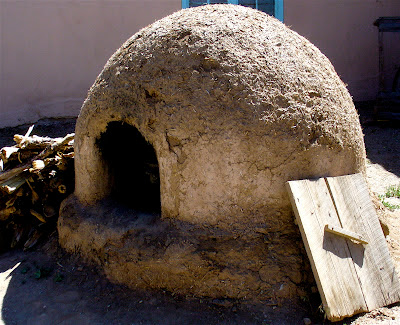 And lastly, this horno is from the Kit Carson Home and Museum in Taos.

To see more on hornos go to the right sidebar
and look under LABELS- ADOBE AND BRICK
and click on Kilns And Hornos.

For more on adobe, look for LABELS-ADOBE AND BRICK.