Building An Adobe Wall: #6 Plastering And Creating The Designs 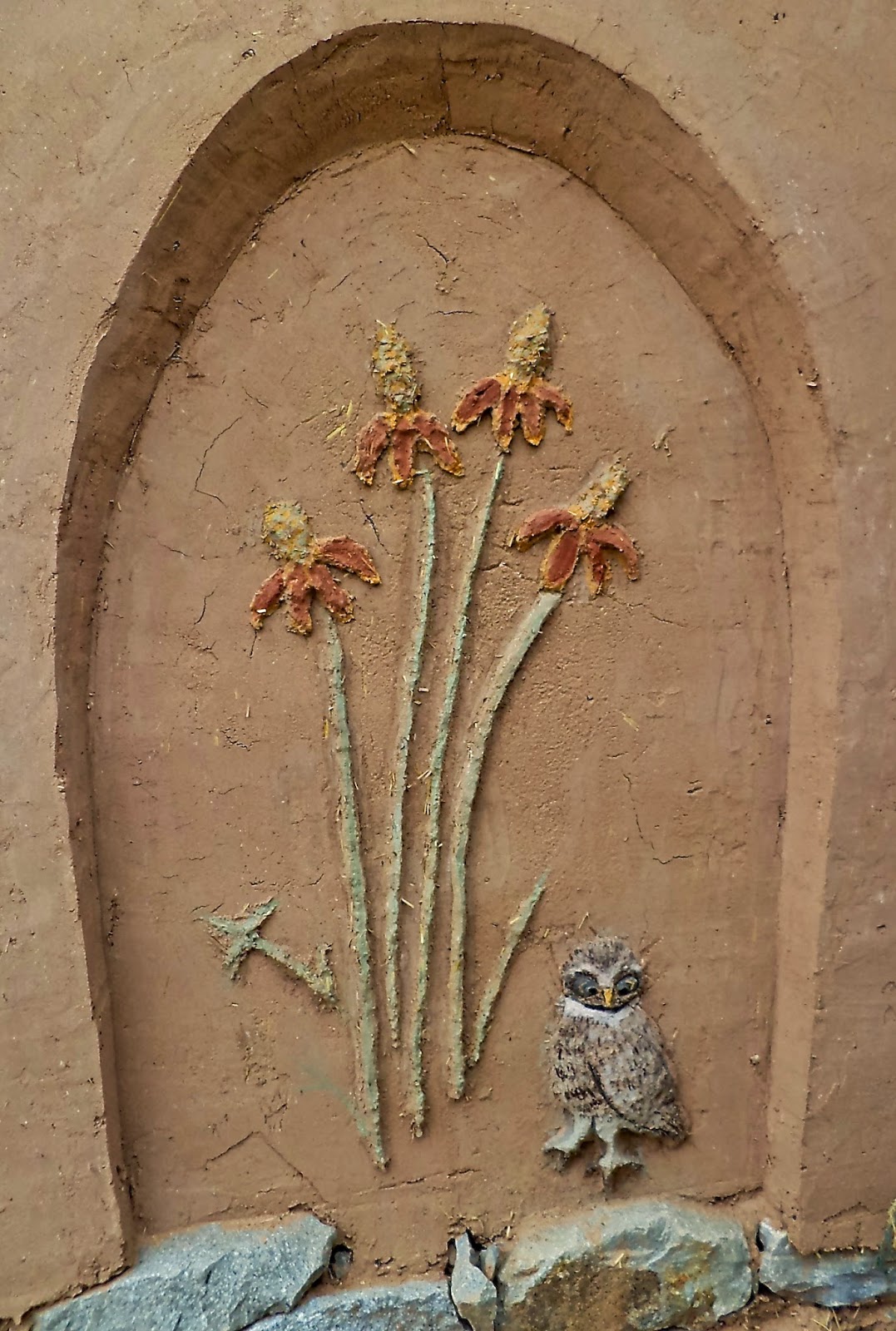 In this post of our series I want to take a look at how we plastered the wall
and Allison will explain how she and her sisters made the designs, such as you see above,
out of adobe mud and mineral pigments.

In the photo above Cynthia used caliche, a clay slip, and oxides on her burrowing owl
with earring eyes hiding under the Mexican Hat flowers Allison created earlier. 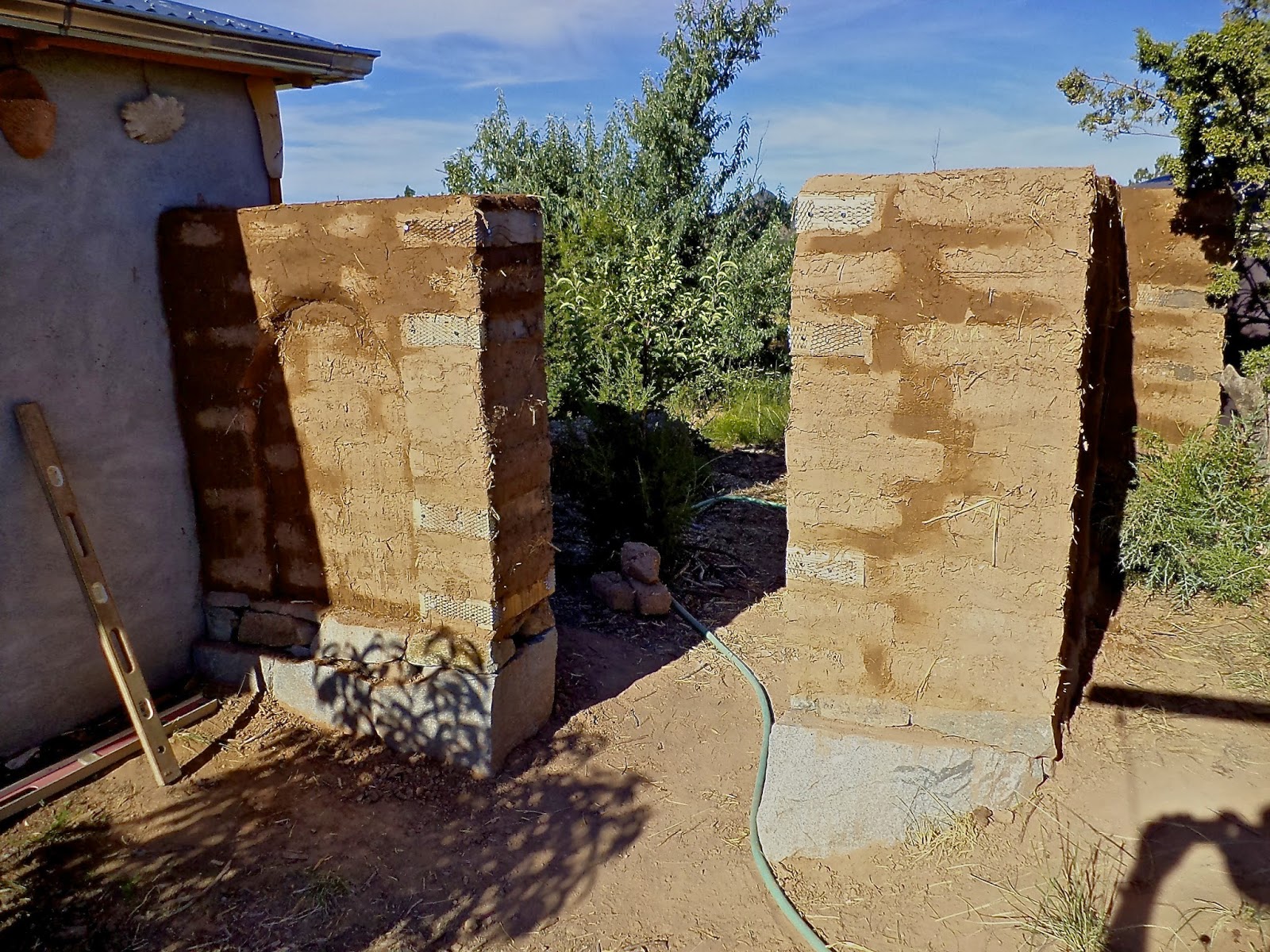 Unfortunately I don't have many photos of the actual plastering process
but a couple of before and after photos should help explain the basic process.

As I noted in the post Building An Adobe Wall: #3 Putting Up Adobes
taking care when putting up the bricks can make the plastering much easier
and can even make it possible to avoid one of the three normal coats used
when plastering with adobe mud.
In general in plastering you have the scratch, brown, and finish coats.
Since the scratch coat should bring the wall out to the basic form you want
if that has already been done while building the wall that is one less coat of plaster necessary.

In the photo above we have finished all but the last course of adobe bricks
and have built out the arches to close to their final form.
I have paid very close attention to keeping the corners plumb with a level while laying the bricks
as well as the wooden gringo blocks at the opening for the gate
to which the jamb for the gate will be attached.
The wall at this point is drying out as we get ready to plaster.
Note all the straw fibers sticking out that are embedded in both the adobe bricks and mortar. 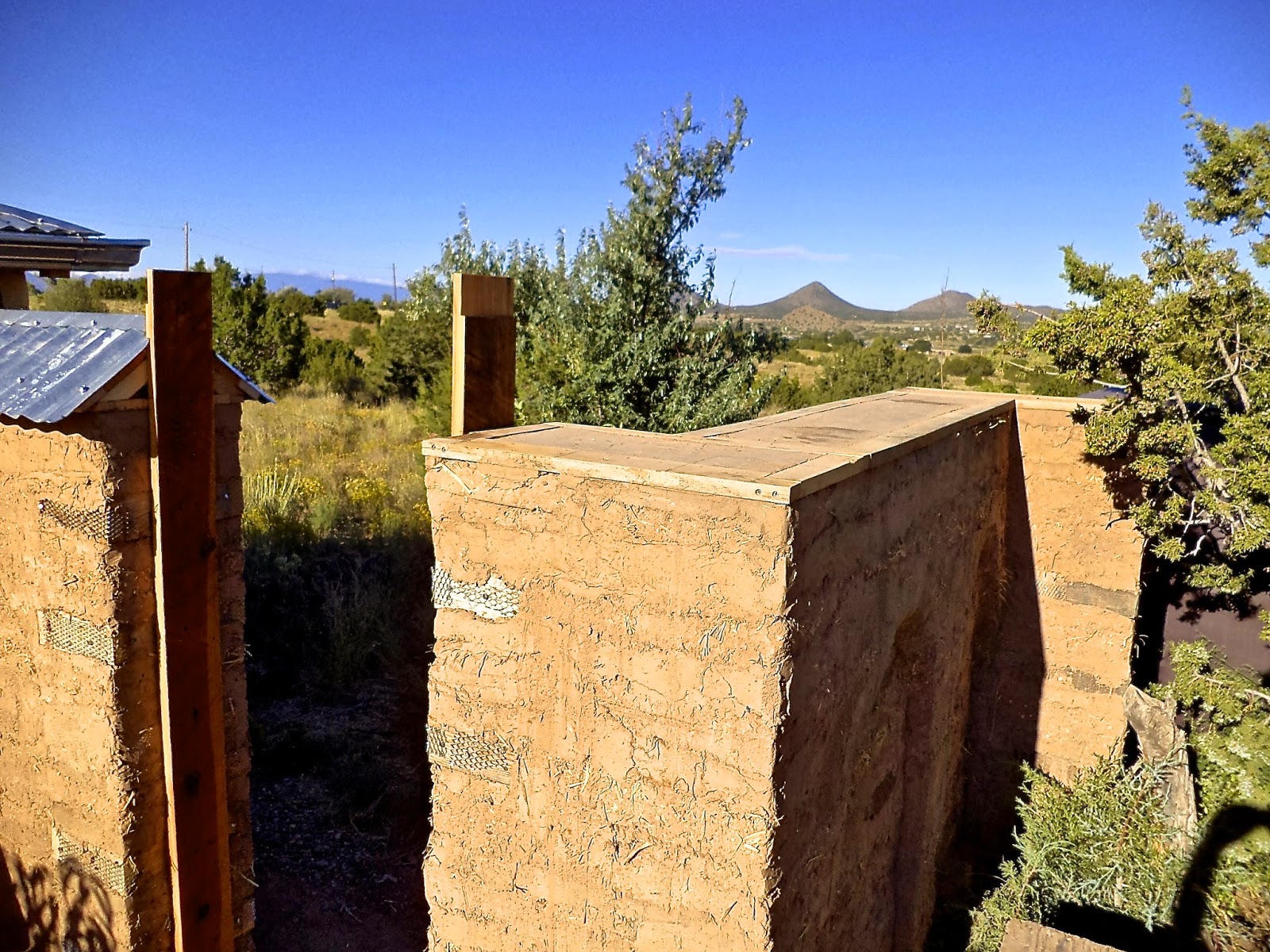 Above we have screwed the jambs in and started on the cap before we can plaster.
The wall is mostly dry now and I will take a trowel
and scrape it across the surface to knock off any loose mud.

As I described in Building An Adobe Wall: #2 Getting Started
our soil is almost perfect for making adobe plaster without the addition of either extra sand or clay.
We end up with a few surface cracks but they are not a problem to us.
For plaster we generally add straw that has been chopped to a length of four inches or so.
We wet the wall lightly with a mist and keep wetting as needed as we plaster. 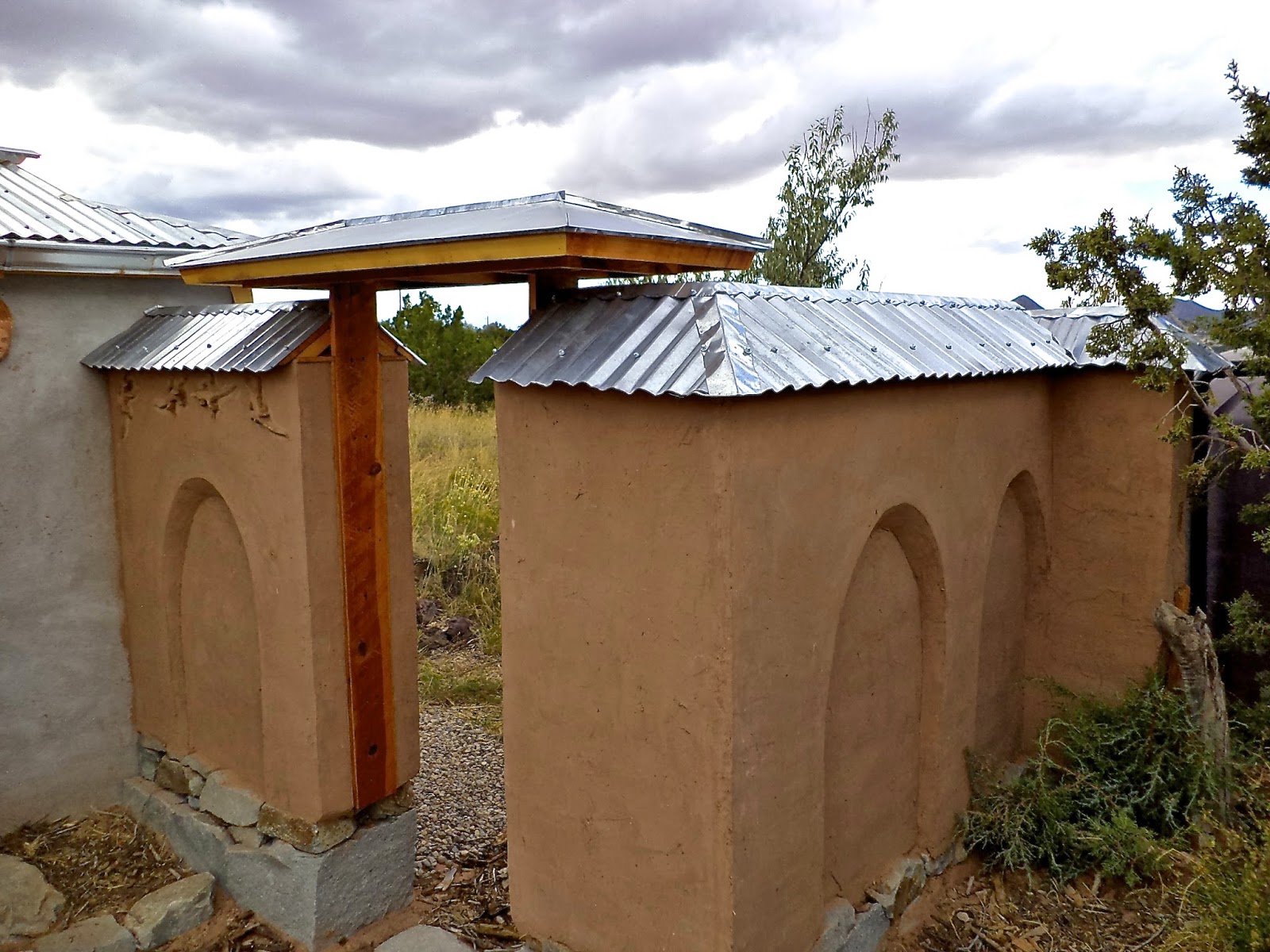 And now you can see above we have applied our two coats of adobe plaster.
Oftentimes three coats is necessary, but as I noted above
because we didn't have to do a lot of buildout with the plaster in this case two sufficed.
We used a steel plaster trowel and using the level as a guide
we built out the corners to the nice clean lines you see above.
Many plasterers will use a screed to get a nice smooth plane
but I like to get as close as I can with just the trowel.

When plastering I try to keep as much pressure on the trowel as I can
as the compression helps the mud particles bond tightly to each other and the wall.

To the left of the gate Allison has started on her first lizards. 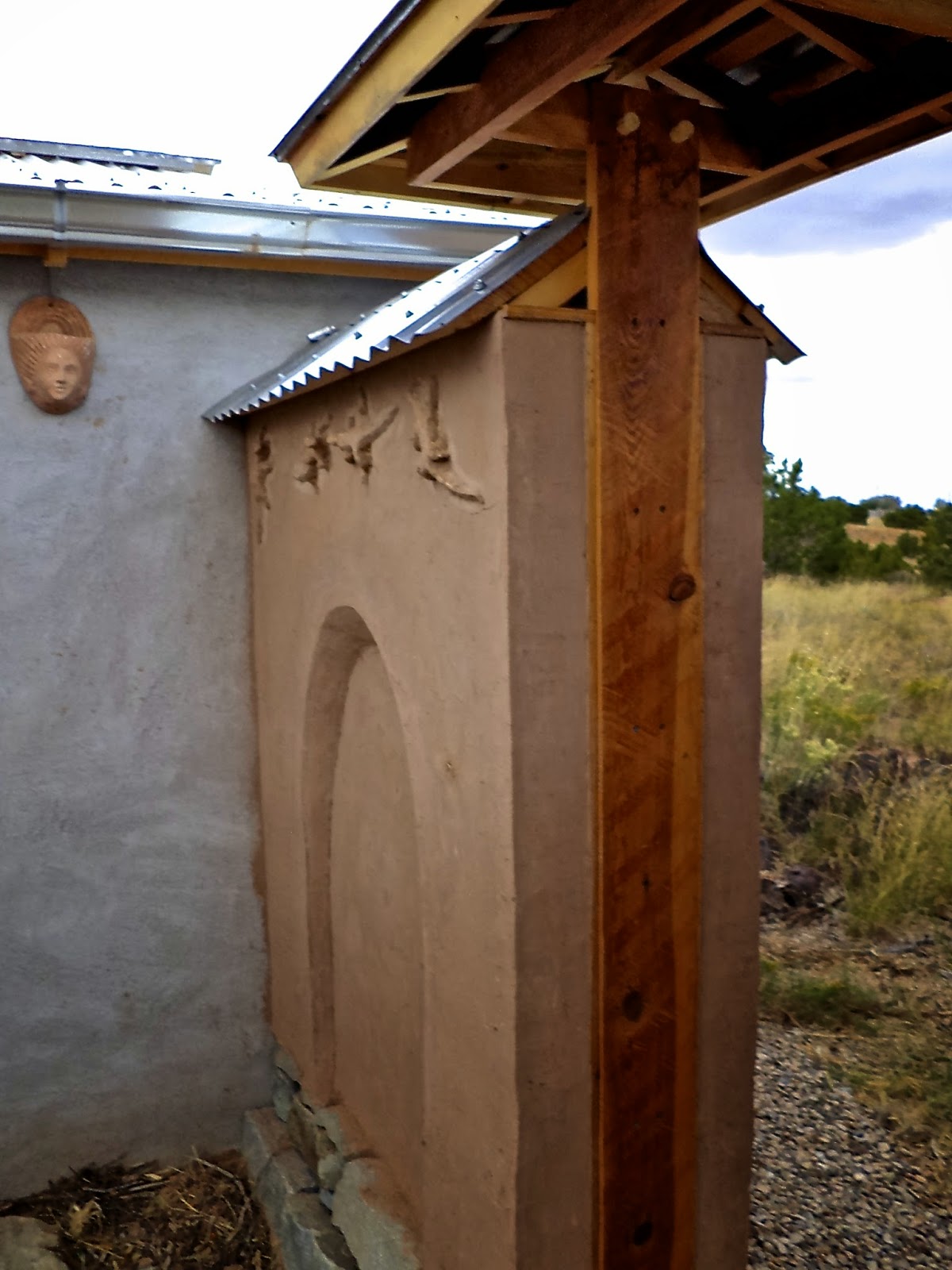 The adobe dirt we used for plaster was screened to a 1/4"
to avoid oversized particles or rocks from sticking out or marring the surface.
To see more on how we mixed our adobe plaster please go to the post
Building An Adobe Wall: #2 Getting Started.

Also above you can just barely see the long narrow 1/2" x 3/4" strips of wood
loosely nailed in to either side of the jamb.
These are to provide a break between the plaster and the jamb
from the vibrations which will be caused by the gate once it is installed.
Also note the short 1/2" x 3/4" horizontal wood pieces at the top of the plaster
on either side of the jamb which provide a stop to the plaster.
It is almost essential to have a stop along every outside edge of your plastered area. 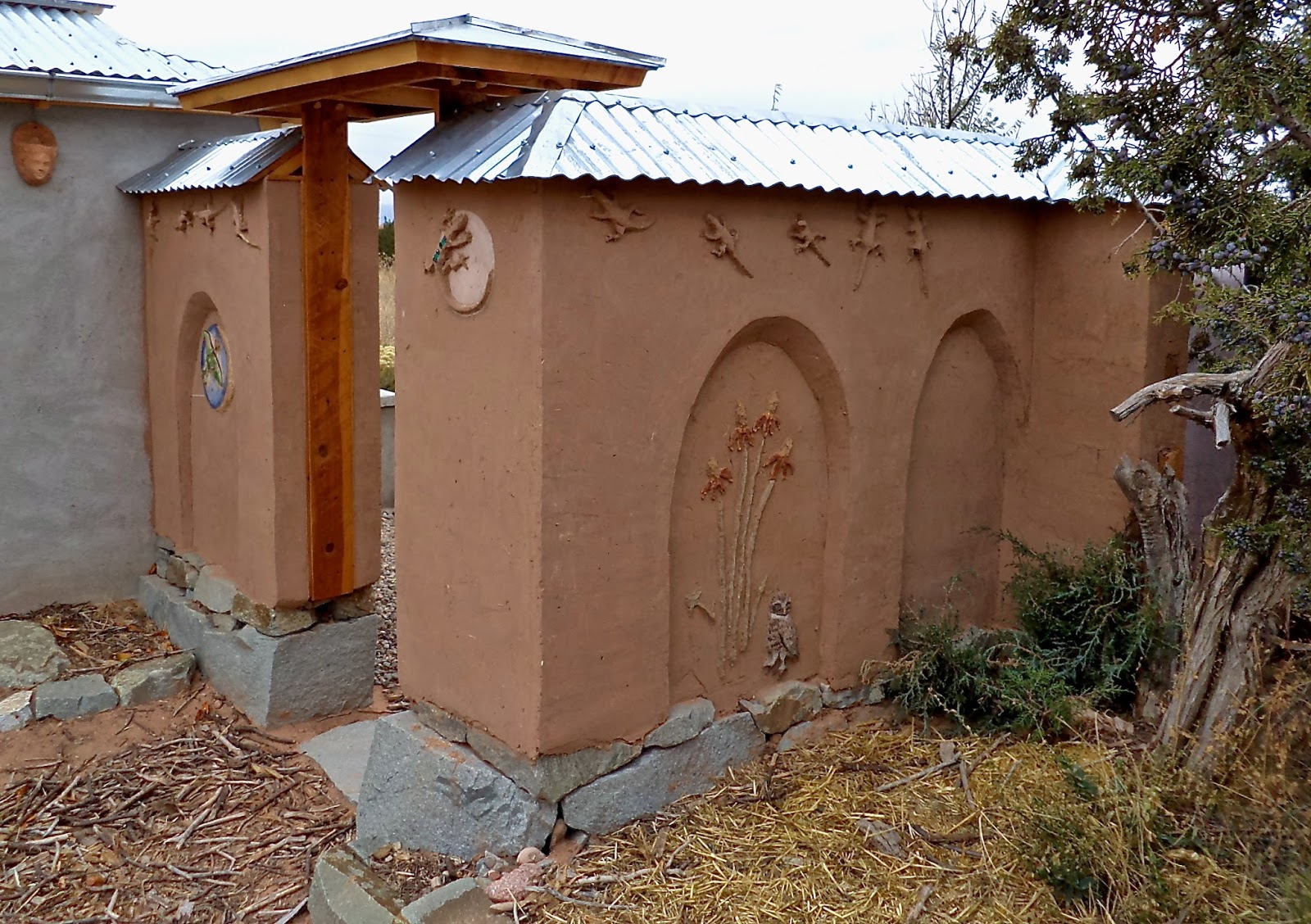 The sculpted figures are created from the same mud as the wall but because we are working with smaller shapes, the straw is broken and crumbled into shorter ½ inch pieces and the mud is either screened finer or, as you work the mud, you can use your hands as a sieve, picking out pebbles that are too large for the piece. Stir water into the mud and straw mixture to just cover and let it rest and be absorbed for about 10 minutes. You should work towards creating a viscous mud dough. 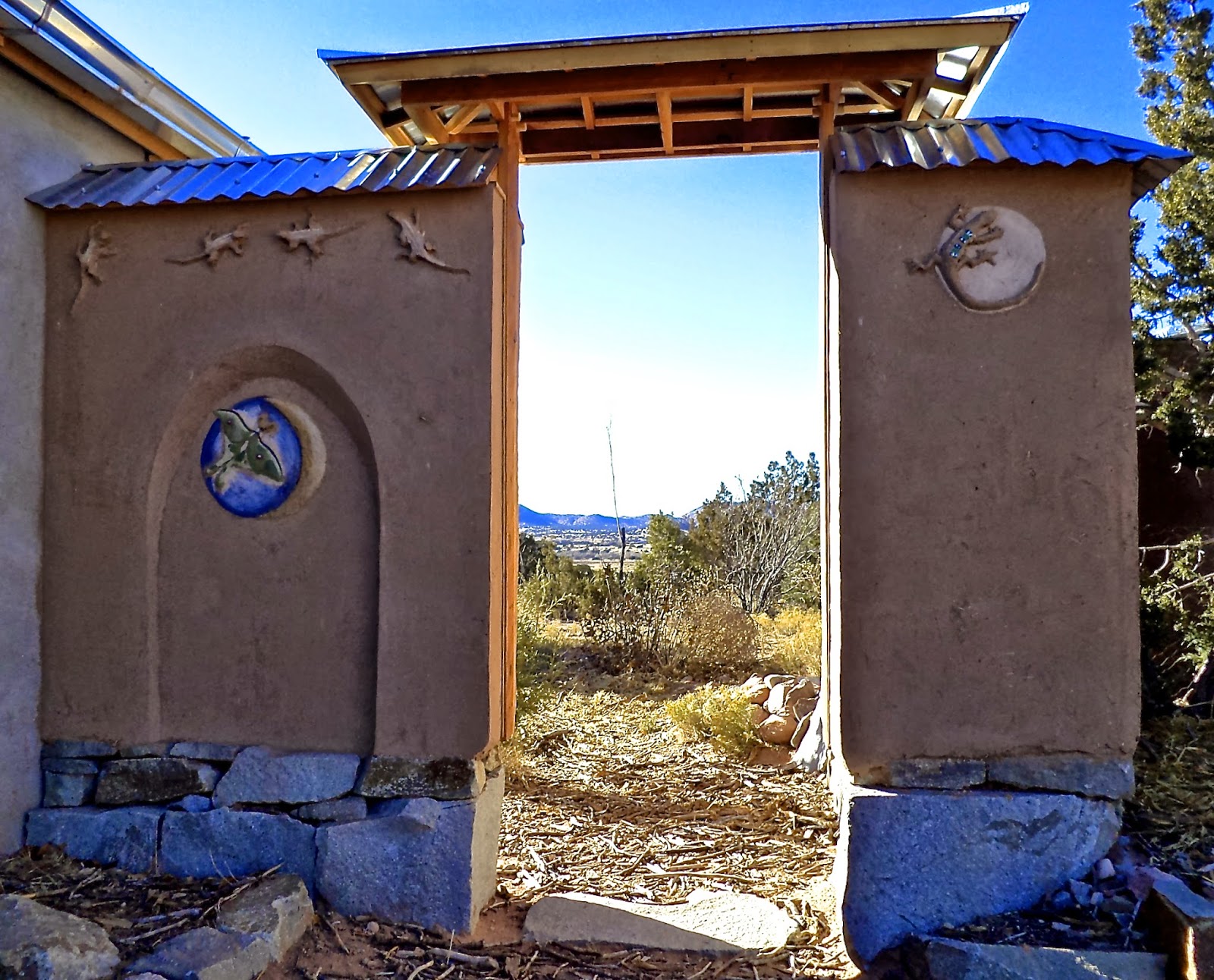 It's an experiment, and the first sculptures, the lizards, are placed high on the wall so driving rain won't beat them up and melt them away.  A quart size yogurt container worked well to transport
mud and keep it handy at the wall.
To begin, spritz the wall with water to dampen, but not so much that there is water running down the plaster creating rivulets. This strengthens the bond between the applied mud and the wall.  Make a mud pie in your hands and roughly shape the larger sections of the sculpture before trying to stick it on the wall.  Press the mud to the wall; jiggle it a little to mesh the form to the wall and hold it in place 30 seconds or more.  If the form falls off, you have the mud too wet or too heavy.  Now you can begin shaping the form in place, adding legs, toes, other features and details, all the while pressing and blending the edges to create suction between the object and wall. 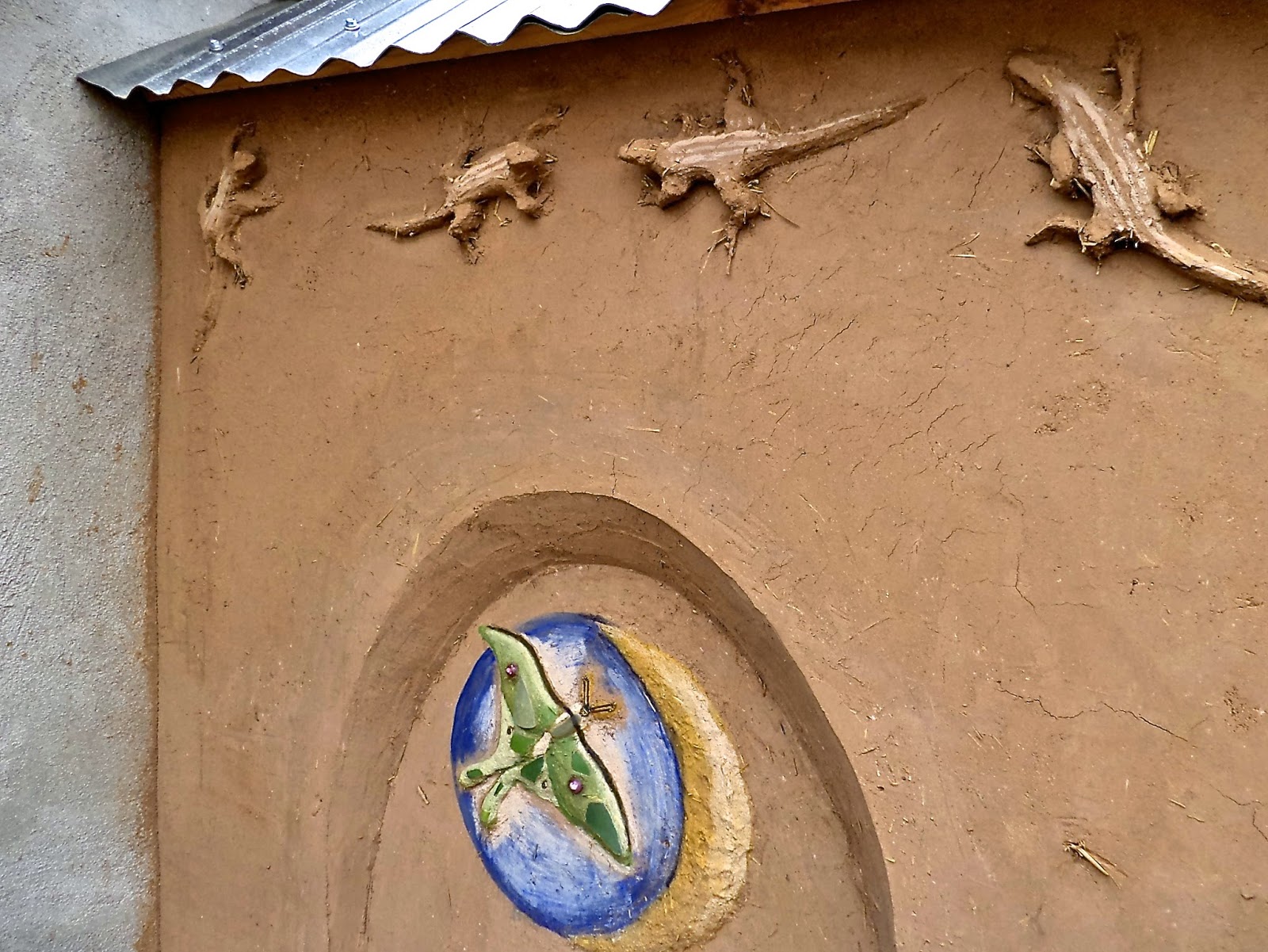 For the raised heads and legs of the lizards, a stout piece of straw was jammed into the body, then the head, legs and tail stuck on and mud smoothed over and built up to create a strong connection that will hold the head in position.  Like a little skeleton.  While the mud is still viscous, you can add adornments.  We used old jewelry from our sister Margaret, beach glass, tagua nut and beads I have collected.  The mud acts as glue to set the pieces.  Libby's lunar moth above has beach glass and beads. 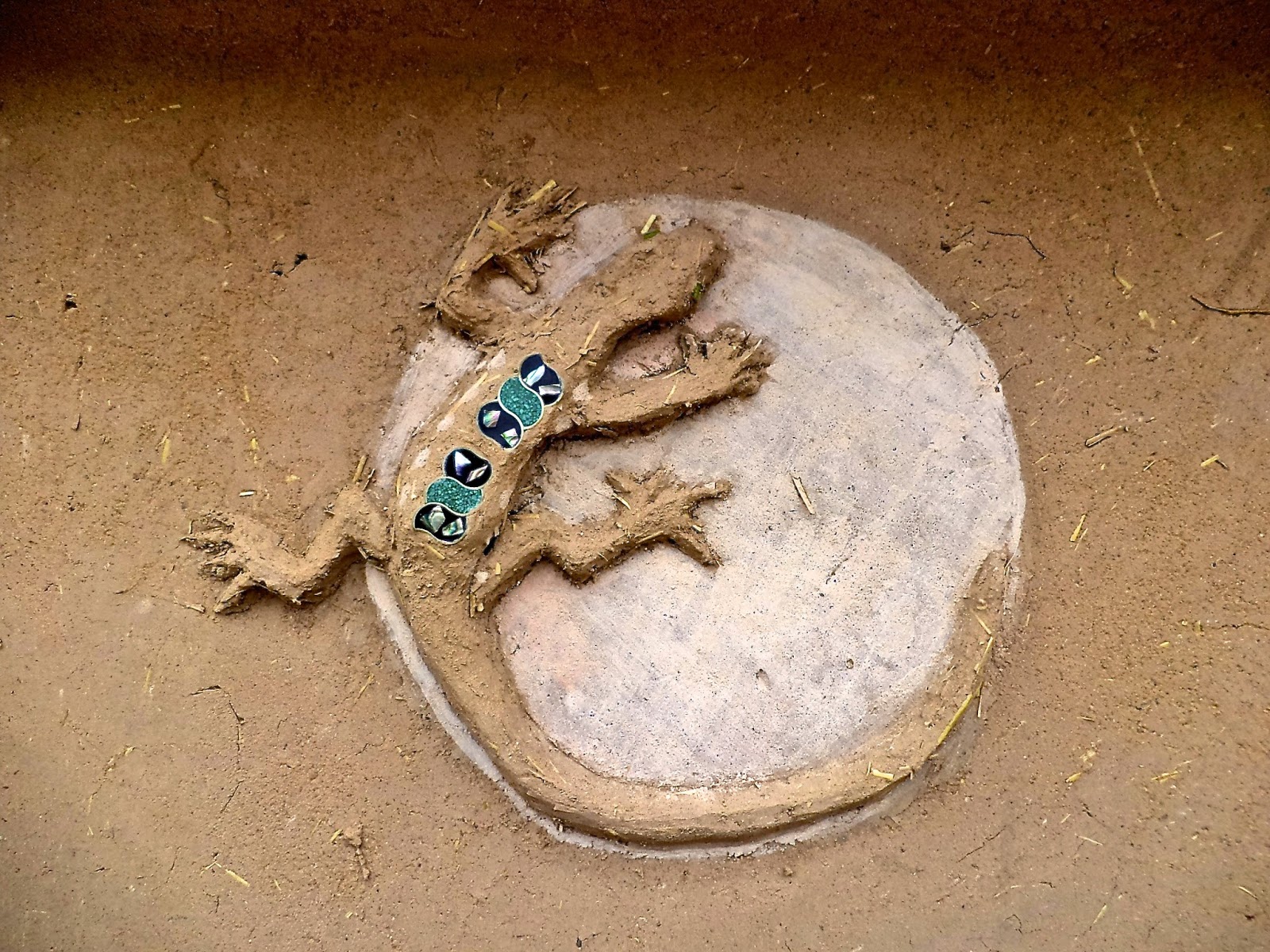 We used caliche, an alkaline deposit from our yard which creates a pinkish white color, natural pigments from BioShield and clay from a private ancestral Puebloan clay pit (a gift from the owner) as a slip (paint) to emphasize the designs. Bioshield indicates on the package that the blue pigment was heated to achieve the color and the greens are pharmaceutical grade Spinell pigments.  All other colors are derived from earth or rock, natural or oxides - common clay colors. Here's a link to some definitions of mineral pigments.
Less then 1/2 teaspoon of powdered pigment was mixed with twice as much water, left to soak a while, then stirred and blended until smooth before using paintbrushes to apply it. It goes on like a wash, or can be applied in several coats for an opaque covering.  Libby mixed a thicker paste for her colored slips and layered them to create a more fine-art painted style on her moth. Above, the Moon Lizard has pearl, onyx and turquoise earrings embedded in his back, glass eyes and a caliche moon. 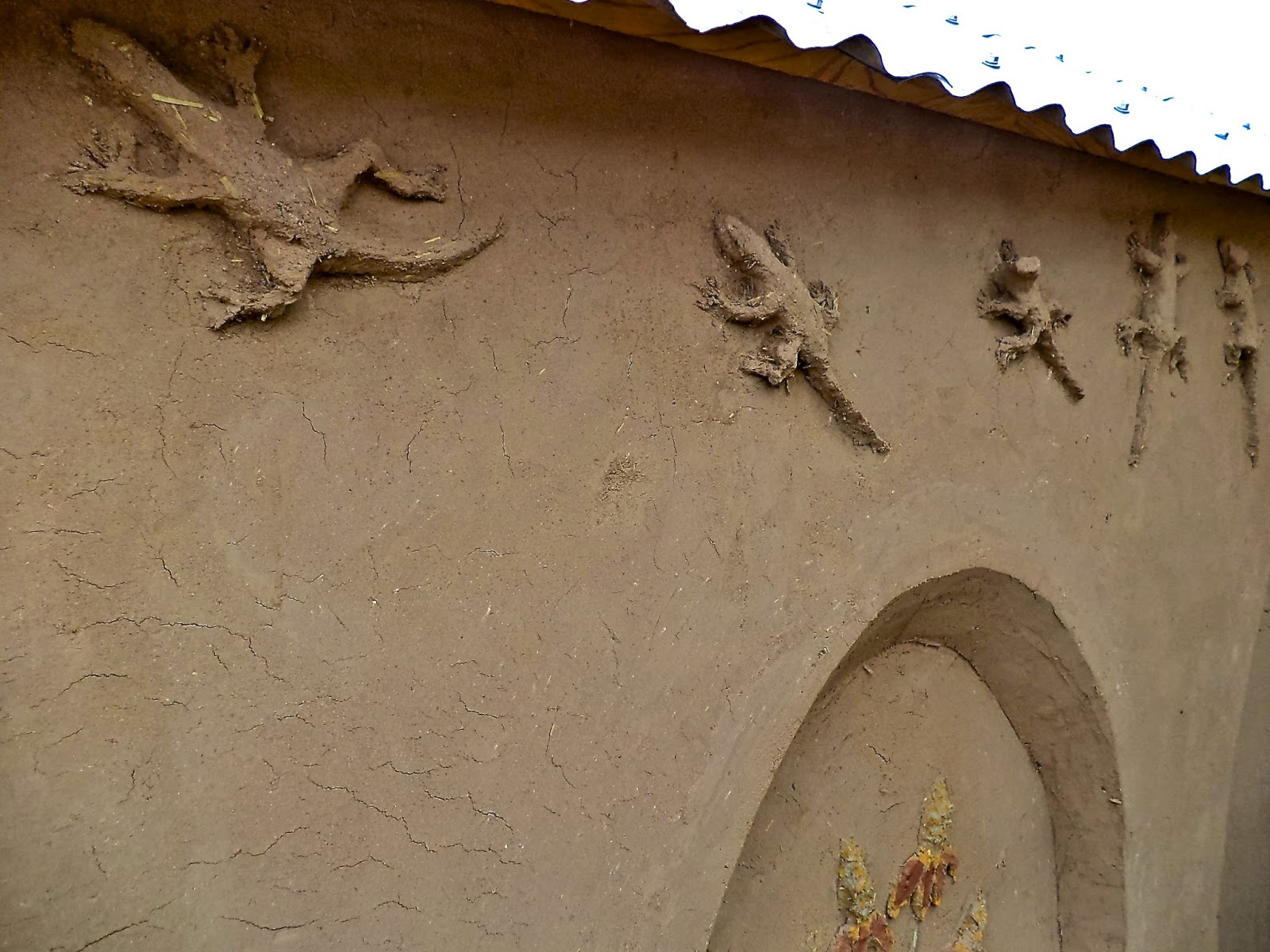 You can see the straw and a bit of detailed motion in the lizards crawling along the wall above. 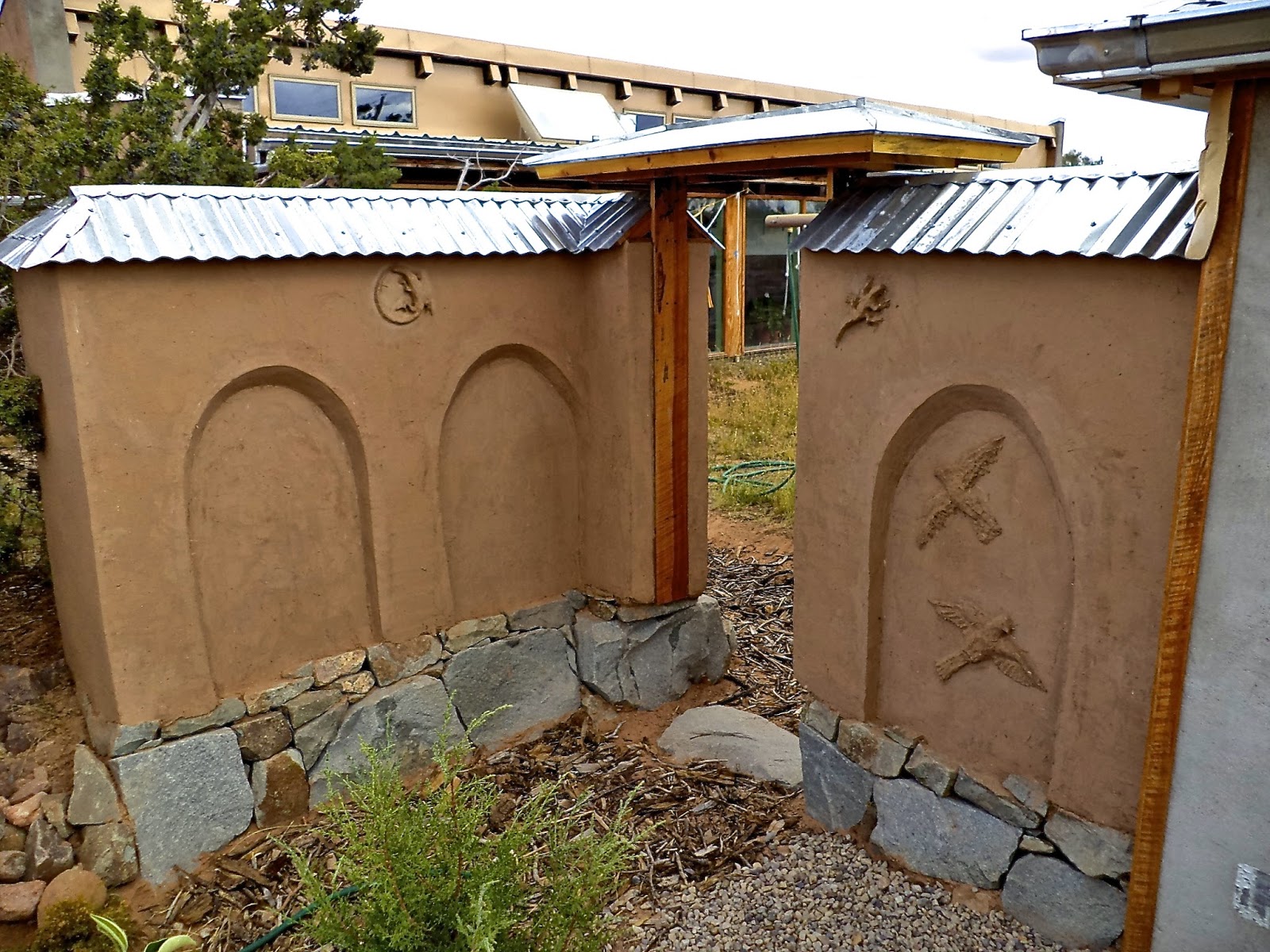 Before any pigment was applied, the creatures subtly emerge from the wall. 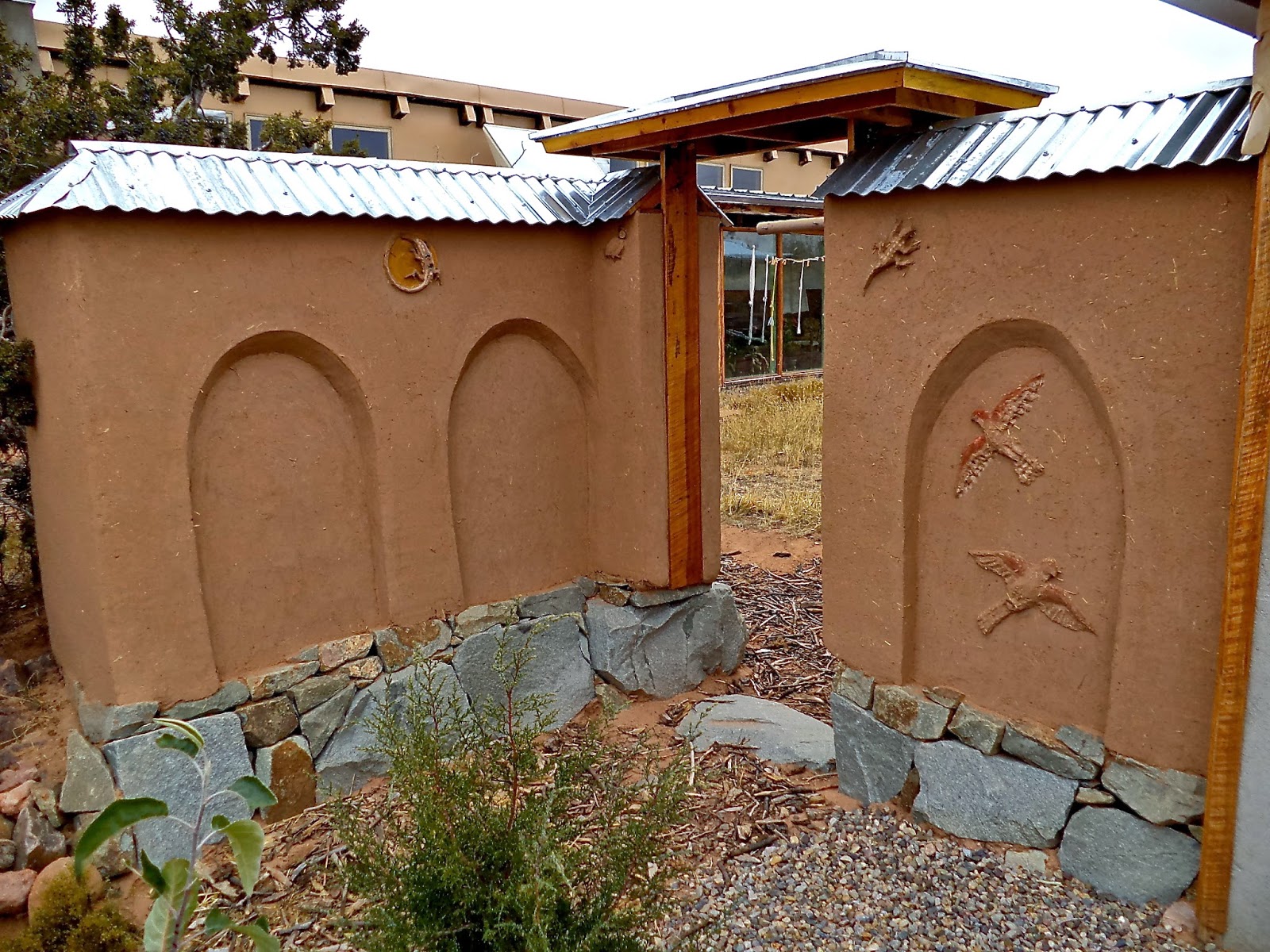 The red ochre and caliche on the hawks' wings make them pop,
and the yellow ochre sun highlights the lizard circle on the left. 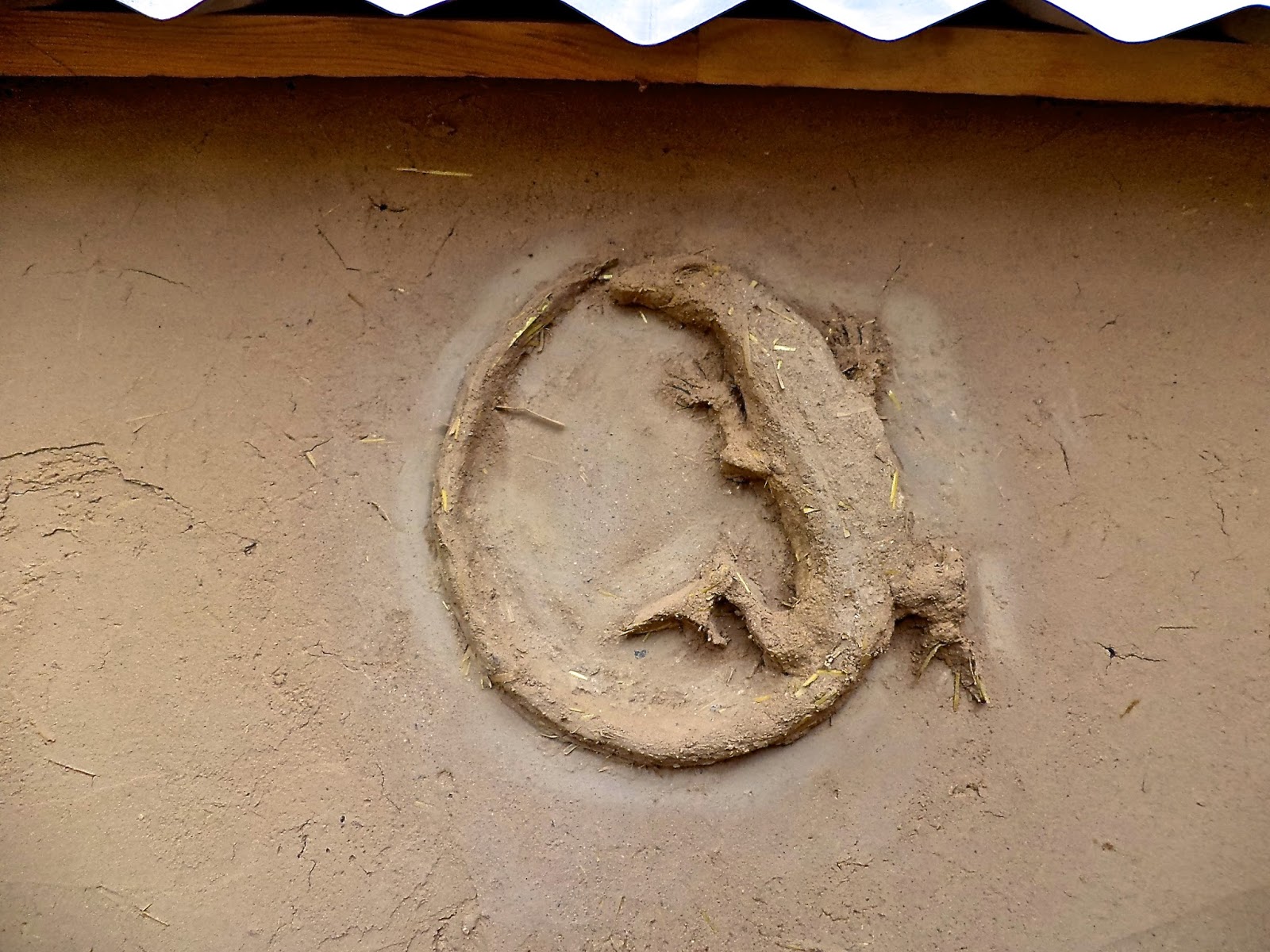 Notice how the mud is lighter behind the lizard from blending and sealing the edges of the form.  I used clay tools, but the flat edge of a screwdriver, putty knife, point of a nail or even a stick will work.  Below, caliche was used for the crude white stripes and dots, yellow oxide for the sun and another pair of discarded earrings for added bling.  The back of the lizard had to be wetted to create a paste for the earrings to set in.
Mud is very forgiving and changes are easy to make!  Remember this is not fired, so the possibility of embellishments or slip eroding away are part of its beauty and cycles.  It can always be repaired or changed.  I suppose the mud could be sealed with something, but we don't want to pollute the ground if whatever was used washes off. 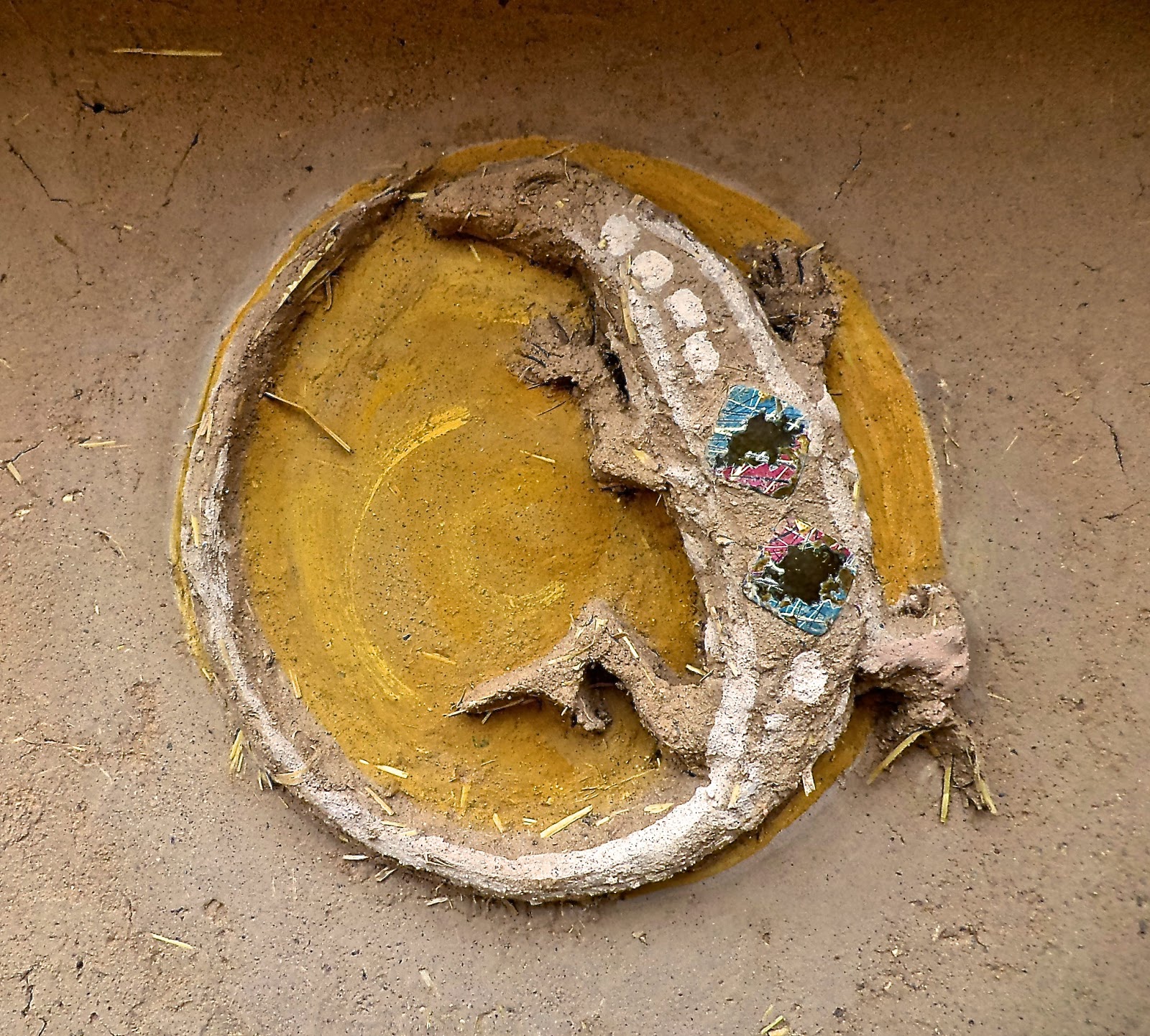 It will be interesting to see how our wall stands up to the rain.
We get hard driving rains a couple of times a year that will impact the wall.
The plaster and designs directly under the metal cap will have no problems
but lower on the wall those designs will slowly wash off
and the plaster may need to be touched up every ten years or so.
The added straw that we mentioned above helps to protect the plaster from rain
as you can see in the post Decorative Adobe Walls
that shows similar walls that have been exposed to years of weather.
In a couple of years I hope to do a follow up post on how this wall is holding up.