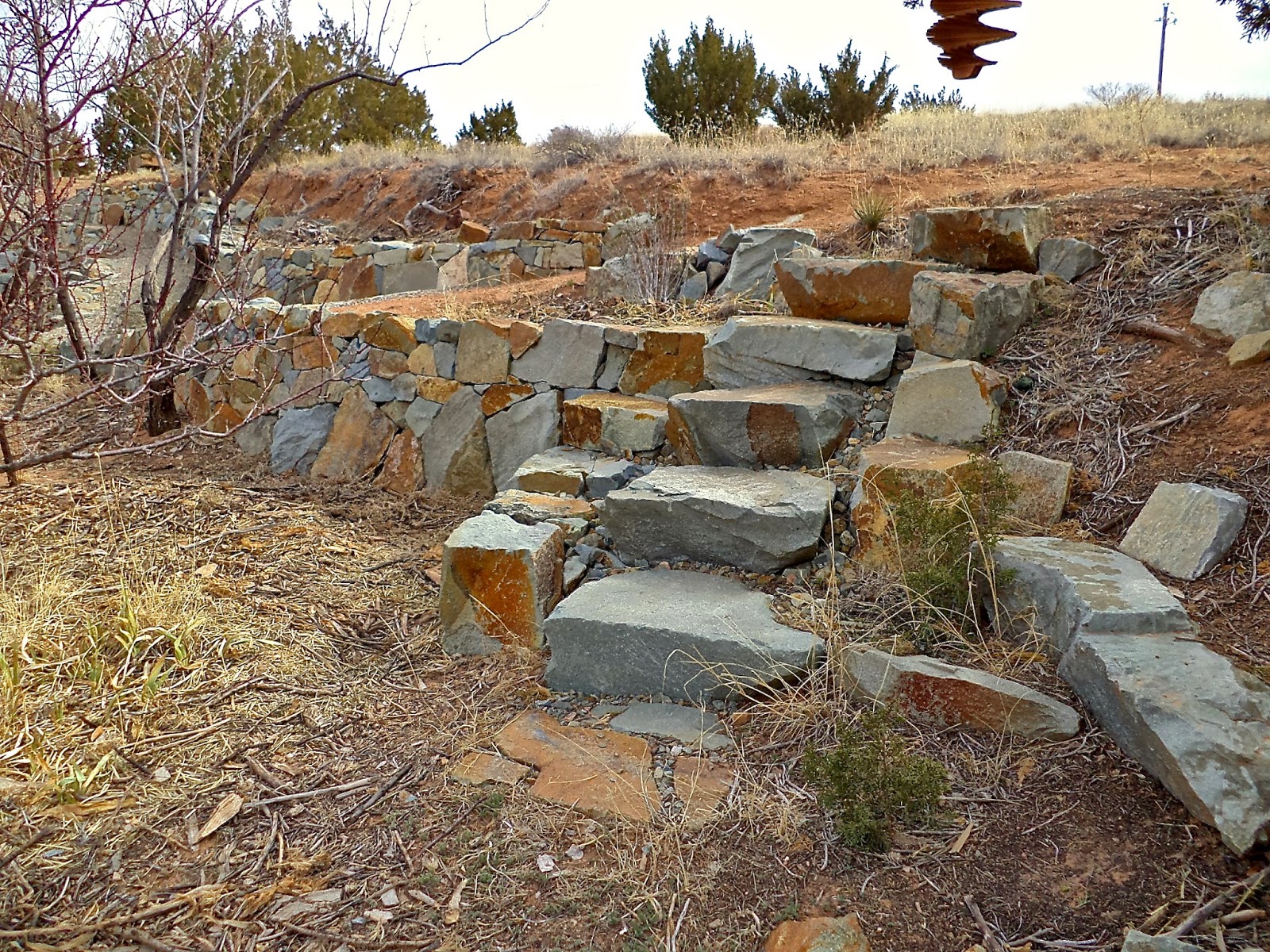 In the last post we looked at a set of steps with three treads:
Tips On Building A Dry Stack Stone Wall #6: Steps,
and this time let's look at a longer set of steps.
Please refer to the previous post as some of the important fundamentals for steps
that I included there will not be repeated here. 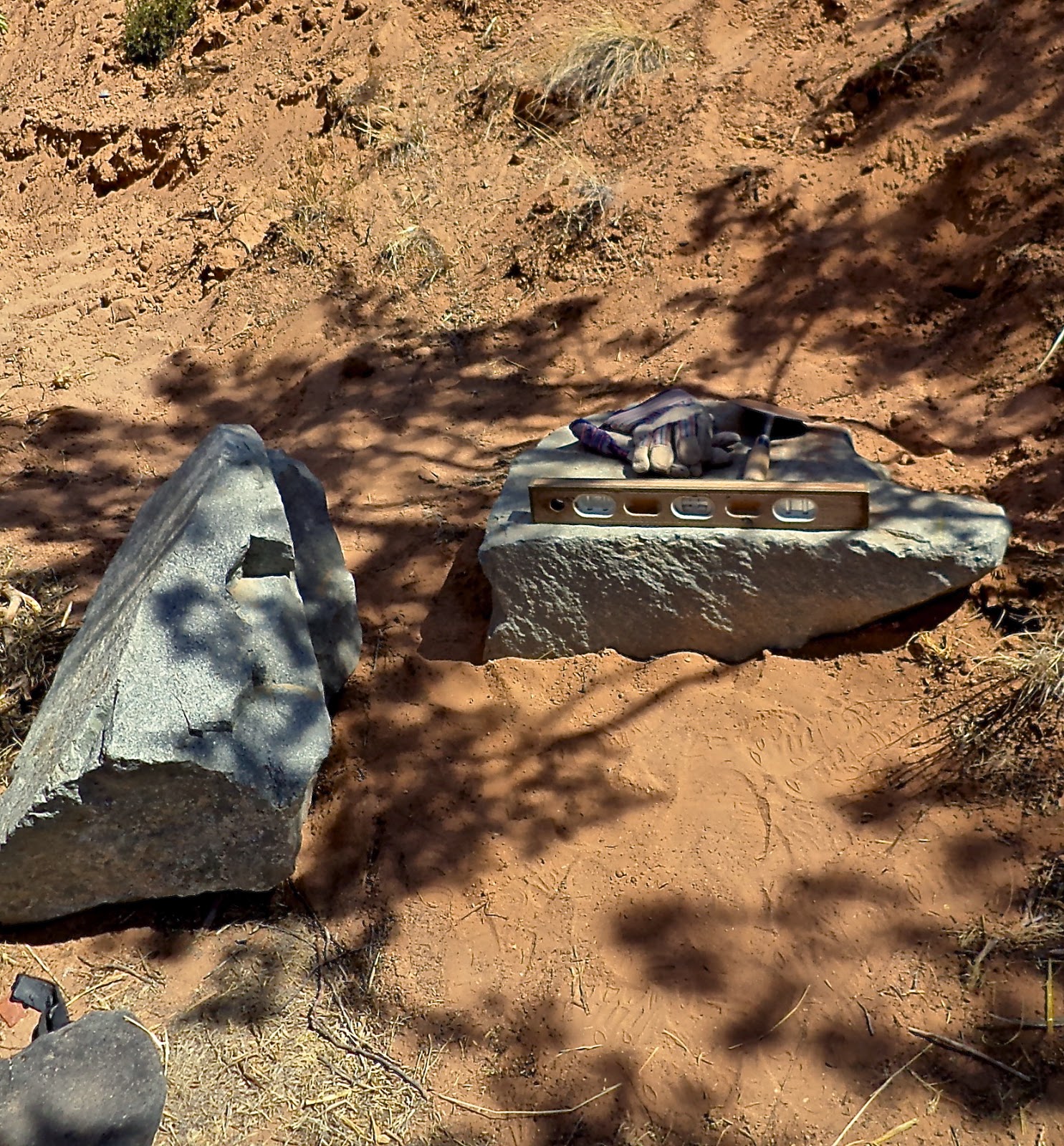 As you can see above, I have measured out 8' to locate my first tread
and that should ultimately put the top step right at the top of the bank.
For a stairway in the home this all has to be very exact, with a very different rise to run ratio,
but in landscaping there is more wiggle room to adjust either the total rise or the total run
by slightly altering the landscape itself (when possible).
I could add inches at the bottom by gently sloping the path up to the first step
and at the top by adjusting the height of the path up or down.

A big mistake in laying out steps is not doing an accurate layout.
You don't want to end up with the top tread cramped for space
or too far away from the top of the bank. 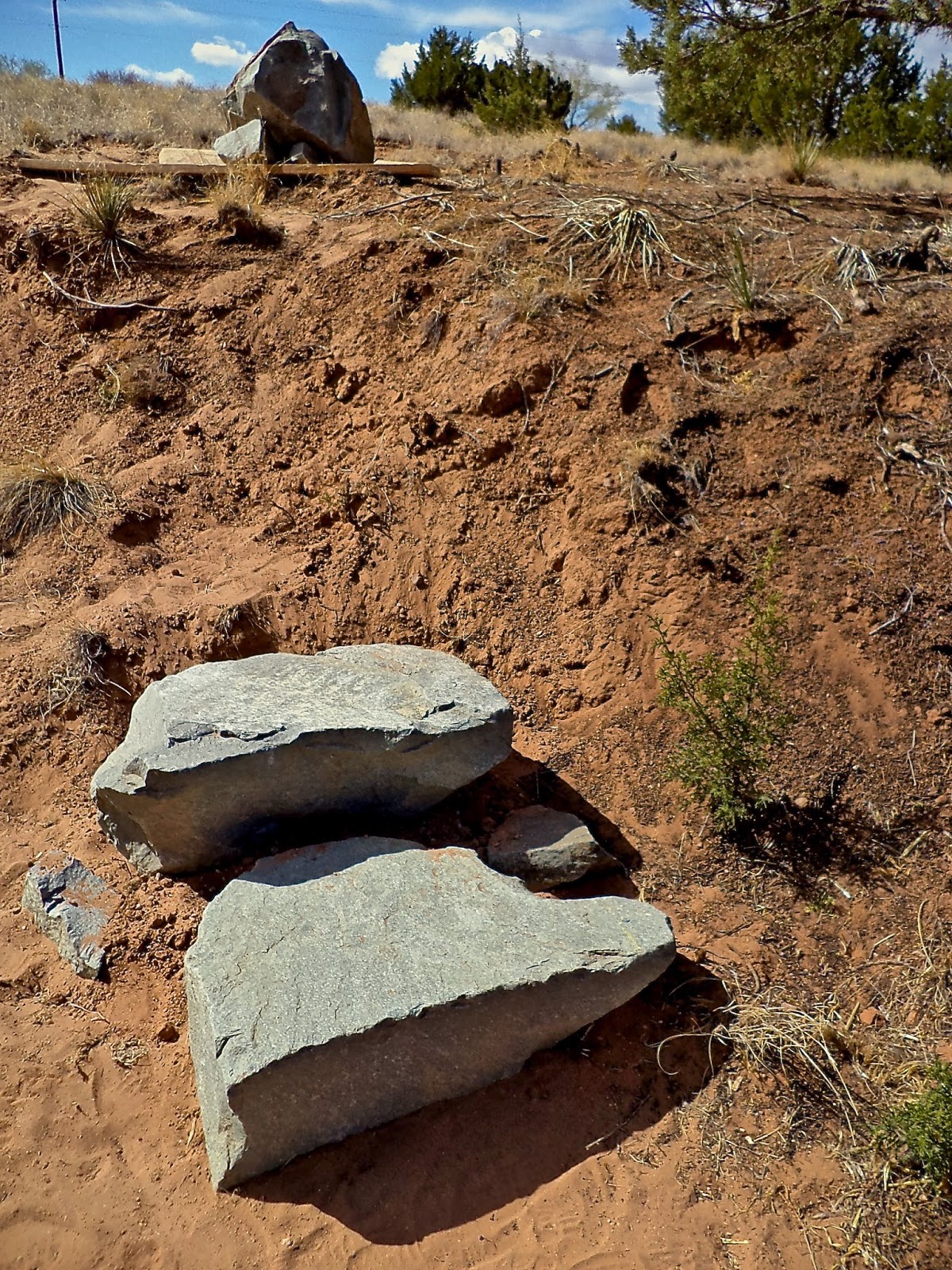 In the above photo I have the first two steps set
and as I stated above I am using an 8" rise and an 16" long tread.
Please refer to the previous post:
Tips On Building A Dry Stack Stone Wall #6: Steps,
for more on how to select and set the steps, the rise and run,
and the difference between indoor and outdoor steps.

Also as I stated in the previous post it is important to tip the tread down about 1/4" to 3/8"
from the front, or nosing, to the back where the next riser goes up.

Again I am working from bottom to top and I am using a hand truck
to get the large step stones to the top of the hill
so I can roll them down into place in a pre arranged order. 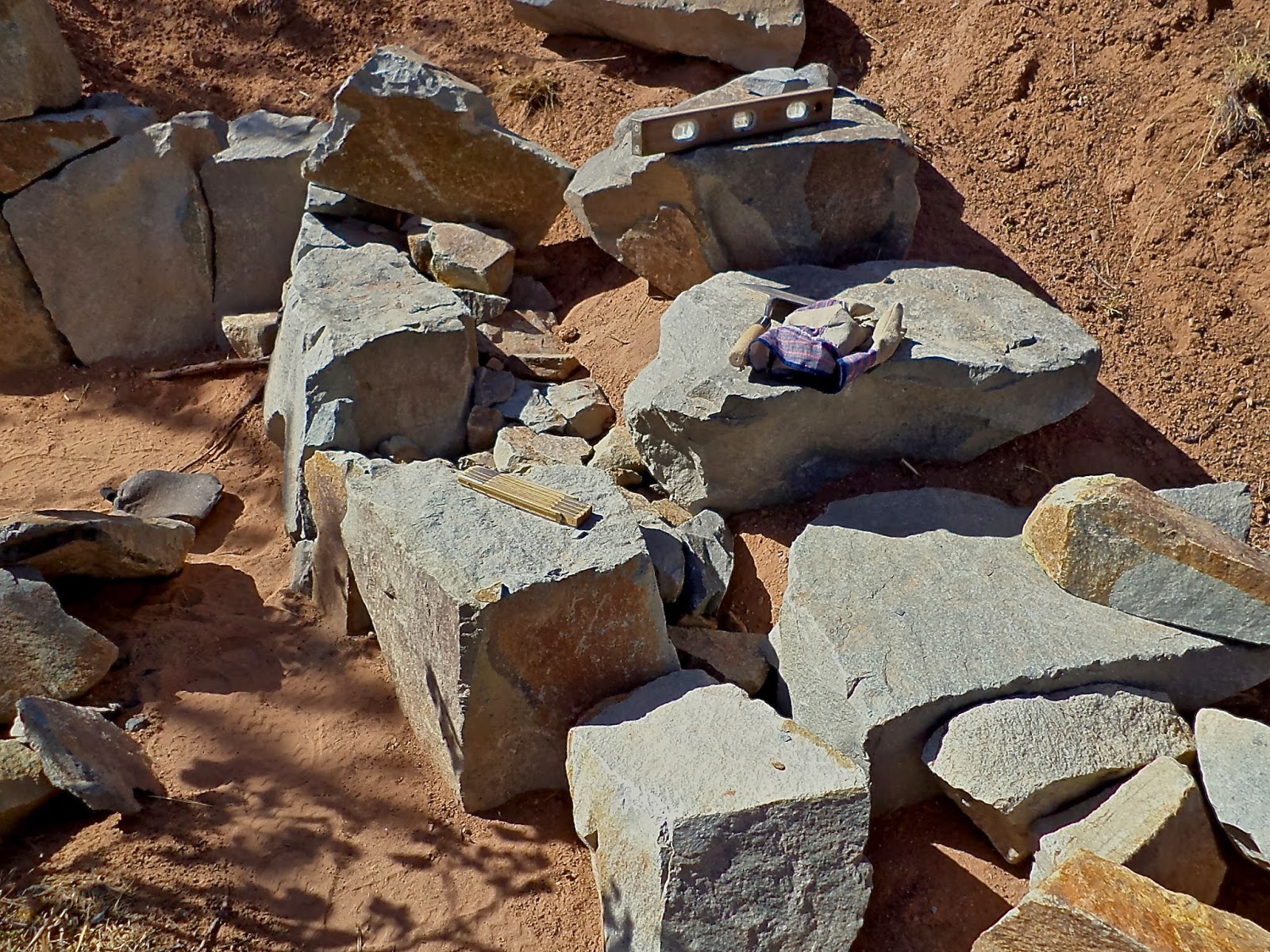 Above you can see I have three treads set,
and I have started to build a side wall to stabilize the the bank before going further.
I am backfilling between the side wall and the bank with carefully placed ruble
to provide firm support and to allow water to easily drain away. 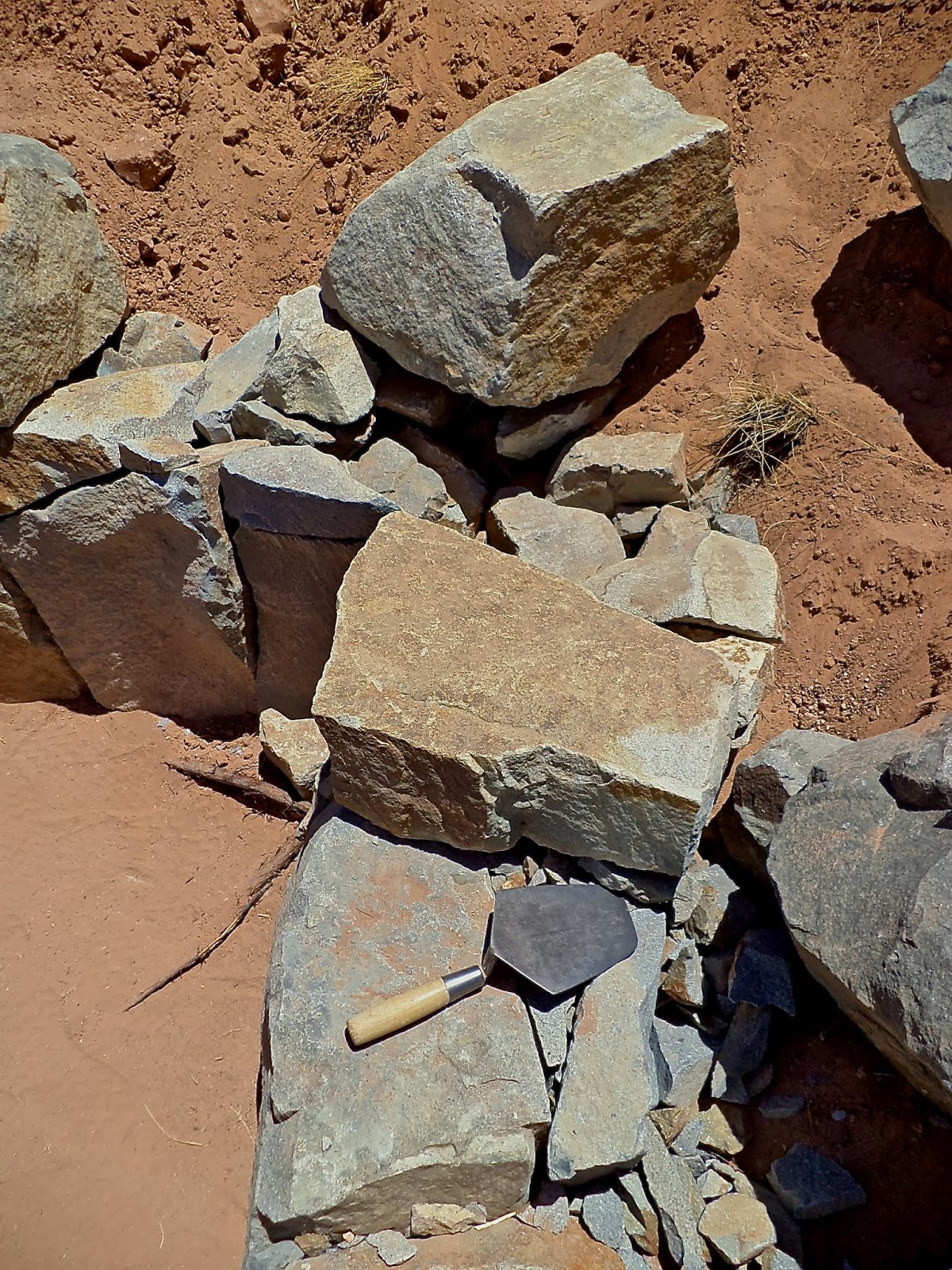 I had set aside at the stone pile some of the "blockier" stones
just to be able to use them in this part of the project as this was an area I wanted to highlight.
I also wanted a set of flat tops on this wall to set potted plants on
because of it's visibility from the house and front yard. 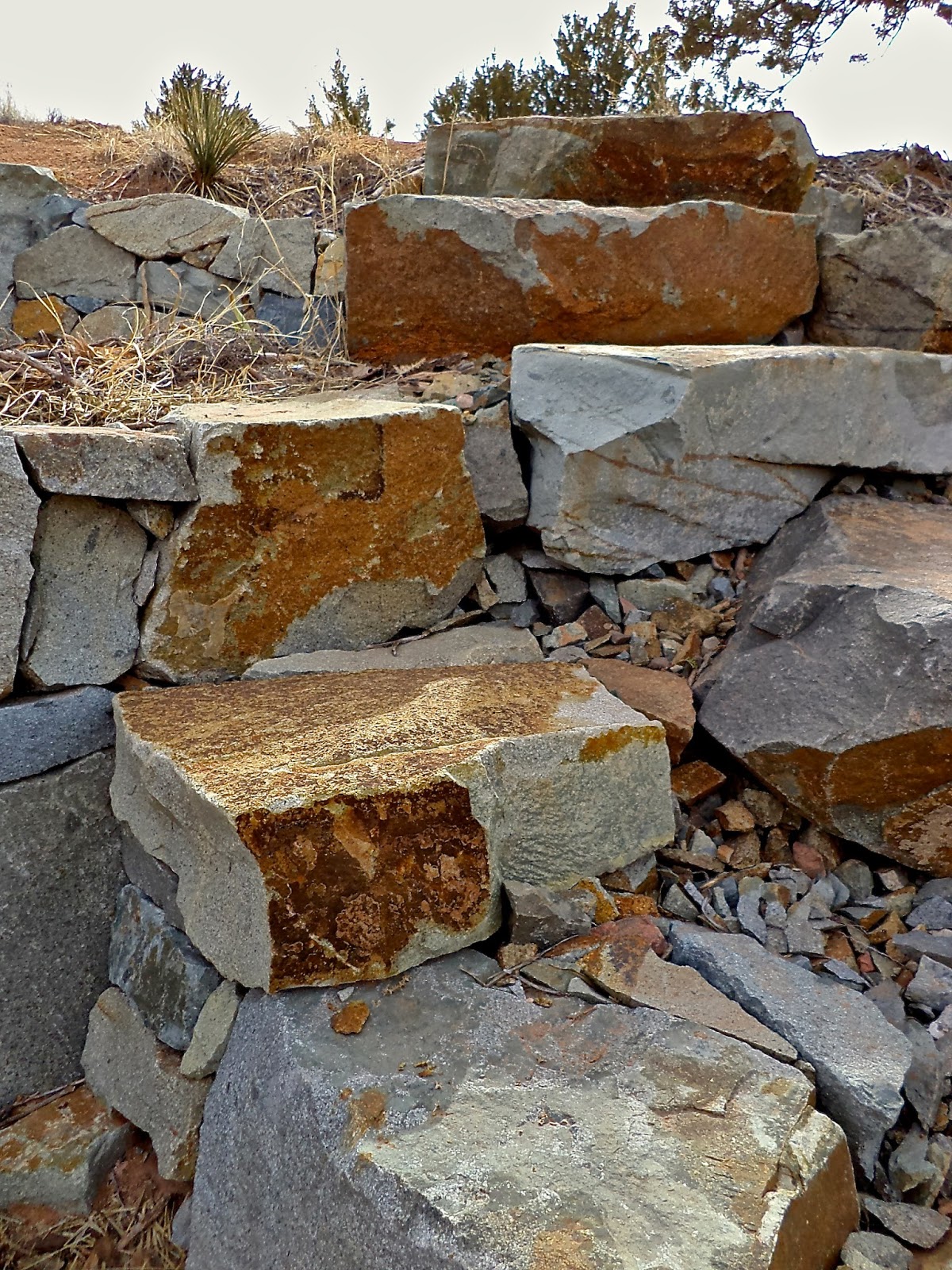 In the photo above note how the flat middle stone on the side wall
has been "locked" into place with a small stone set upright
that extends down into the wall below.
It is rather hard to see but that lock will help prevent the flat stone
from working it's way out over time. 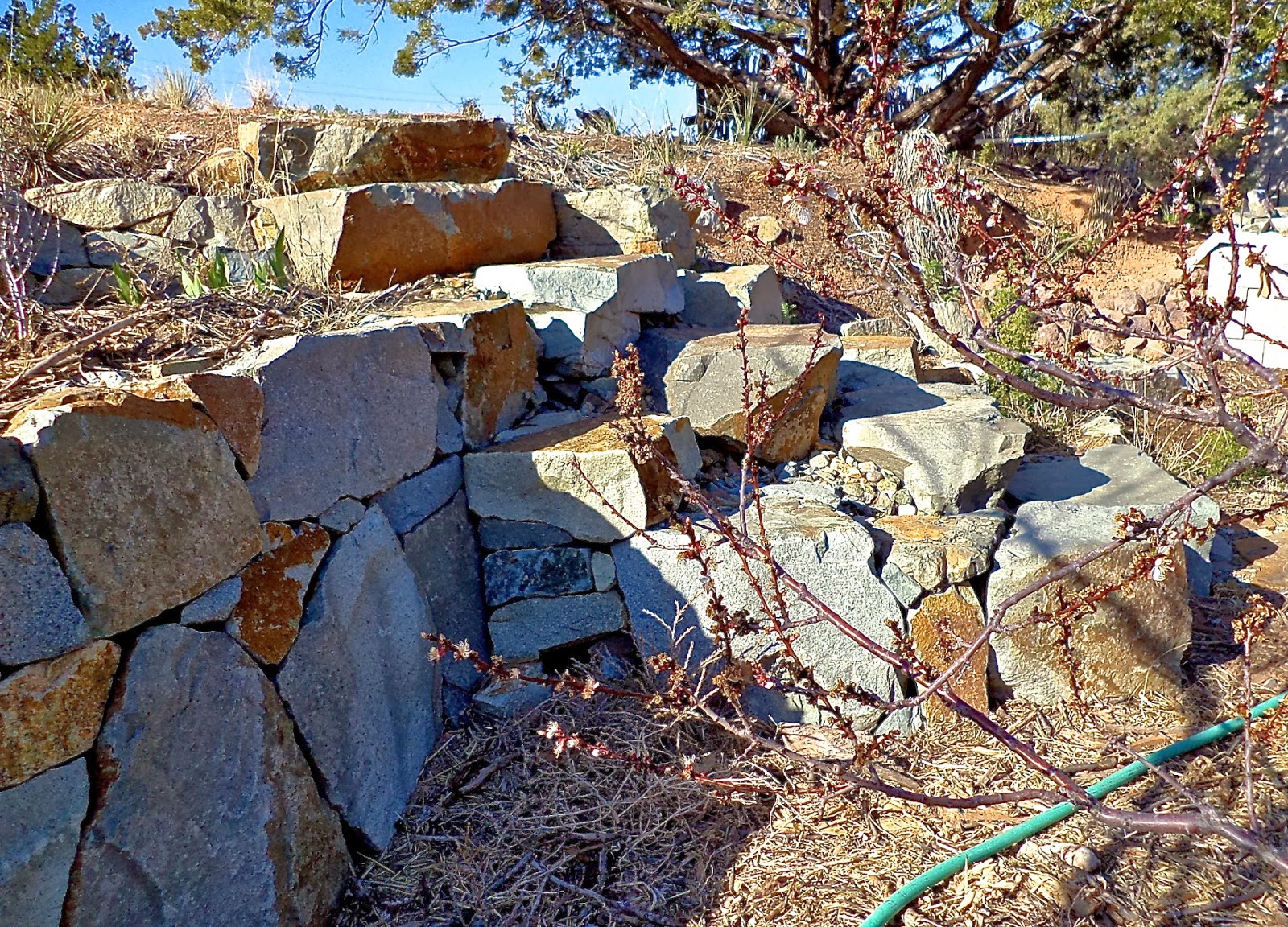 The side wall not only holds the steps firmly in place
but it also serves as a buttress to the retaining wall leading up to the steps. 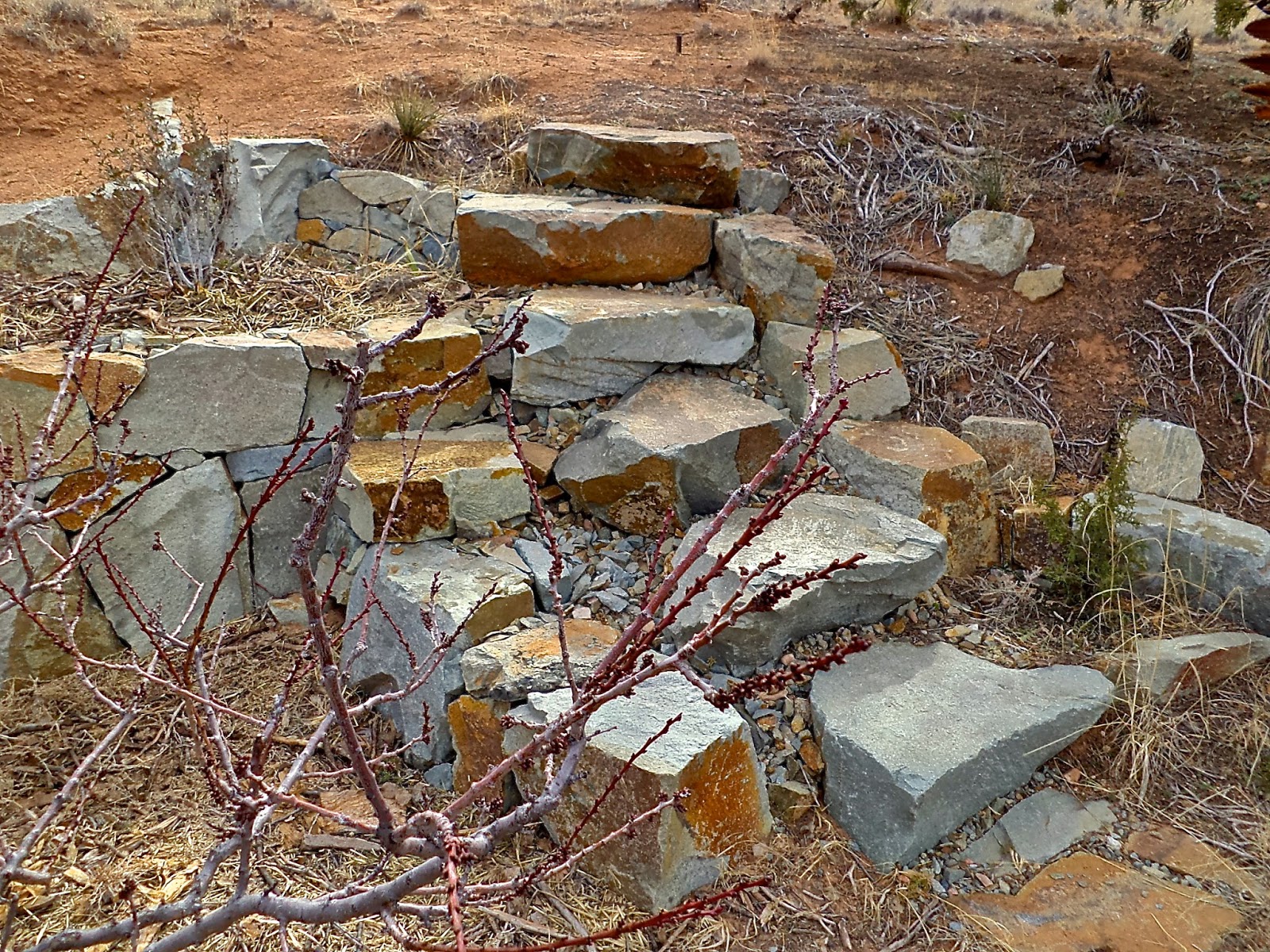 I filled in around the steps with ruble and on top of that I covered the ruble
with the small chips and flakes that were left over from chiseling. 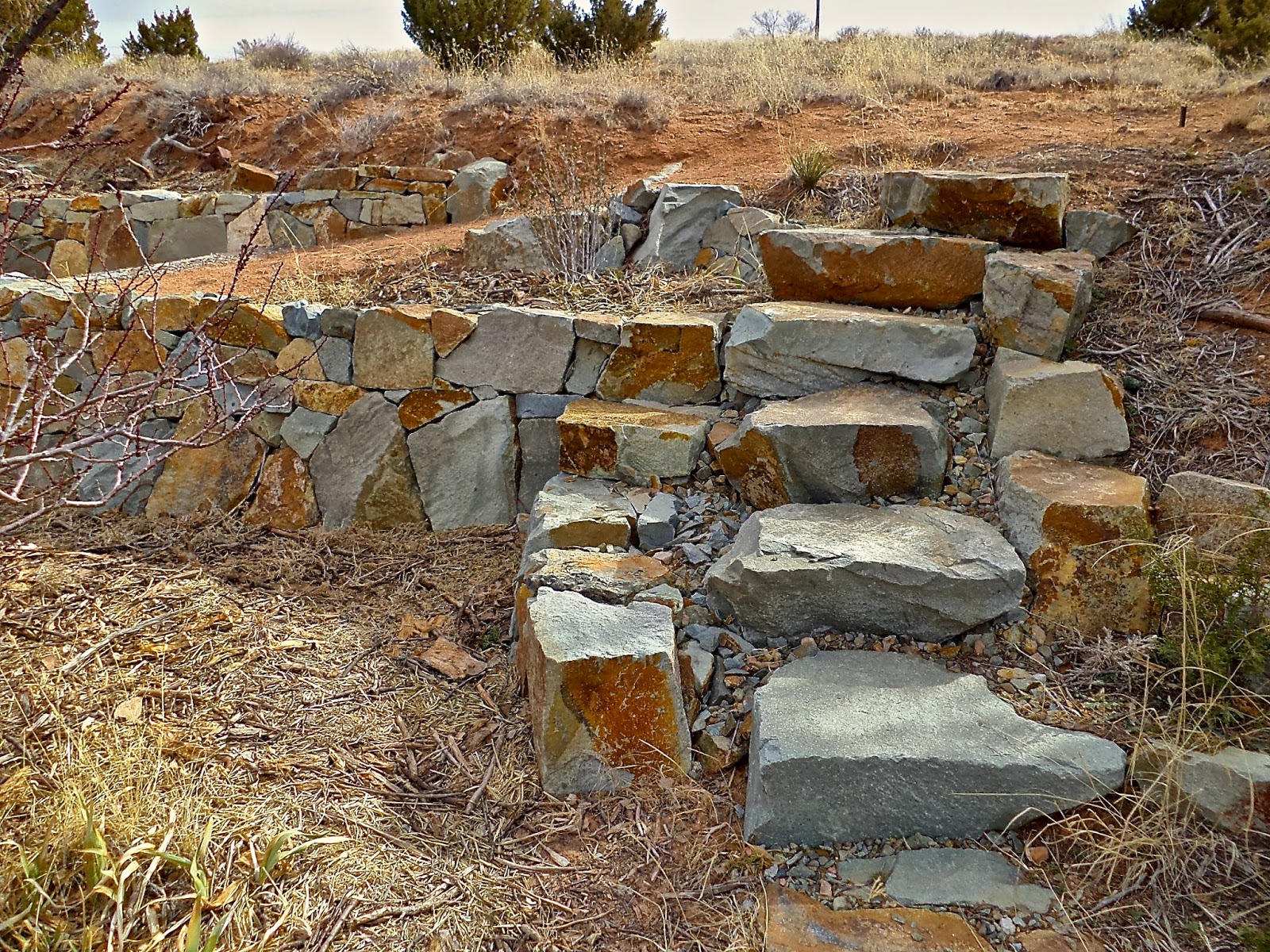 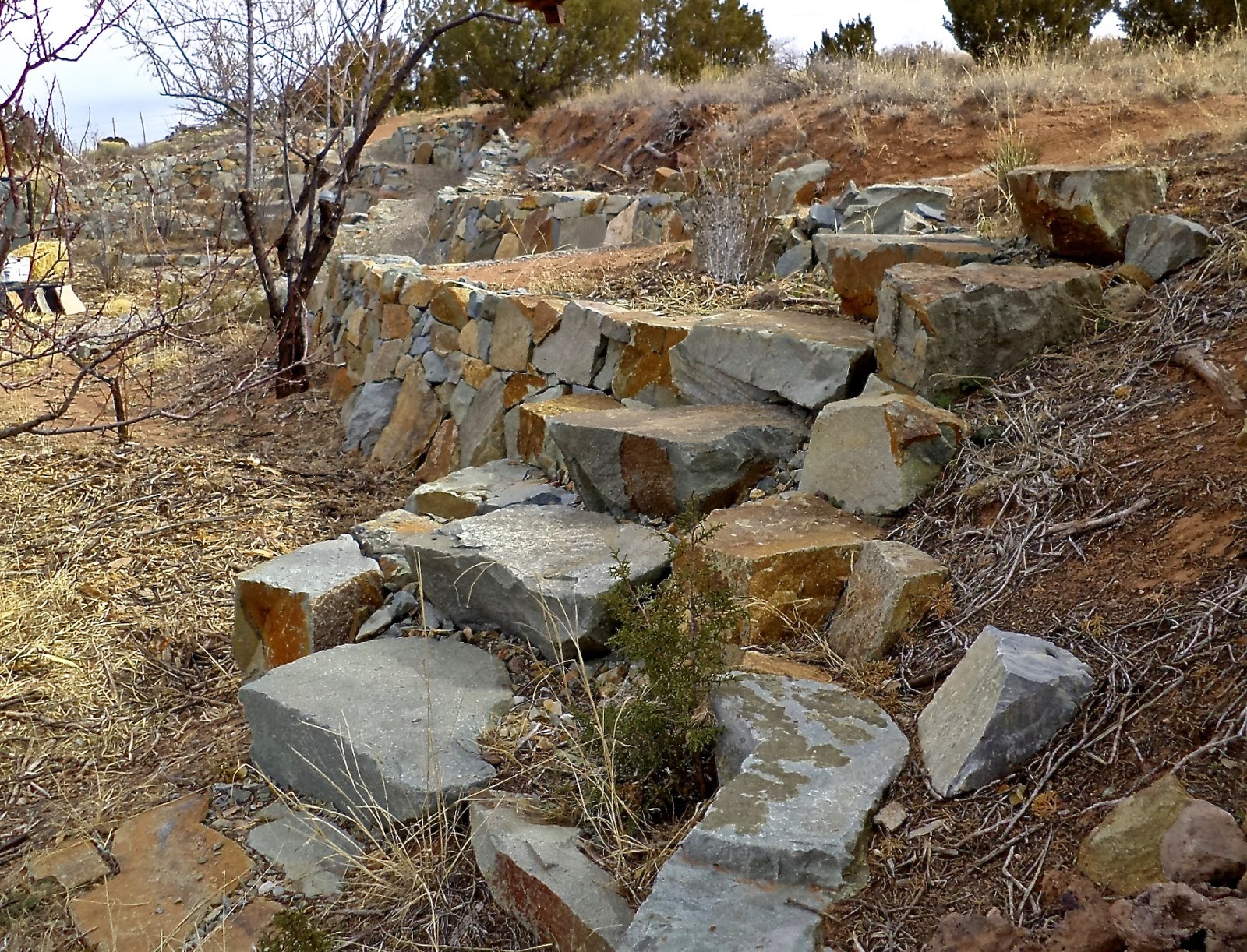