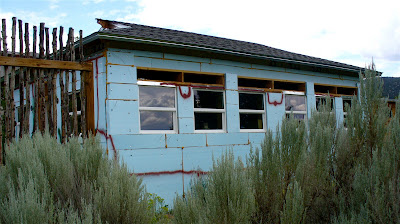 Our friends Bill and Barbara have been building ( in their spare time )
a music and art studio next to their house in El Rito, New Mexico
which is in the northern part of the state.


We happened to stop by the other day to check on the progress.

This studio is a post and beam structure with semi-stabilized adobe fill
between the posts. This is a bit out of the norm for adobe
but a big advantage is that the building can be completely roofed in
before you start the adobes.


Working in one's spare time this lessens the worry about weather
while "slowly" building and gives a covered area
to keep tools and materials dry. 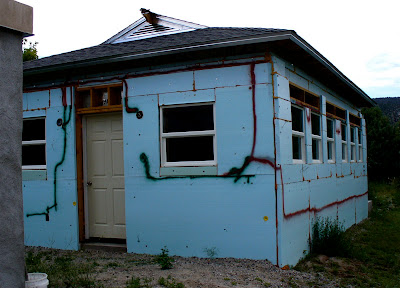 They have things almost closed in and getting ready to wire and stucco
over the XPS insulation, also called blue board.
Judging by some of the small pieces of XPS,
Bill is doing a good job of reducing waste and saving material.
The different colored lines on the XPS are to mark electrical wire
behind the XPS to keep from nailing through the wire. 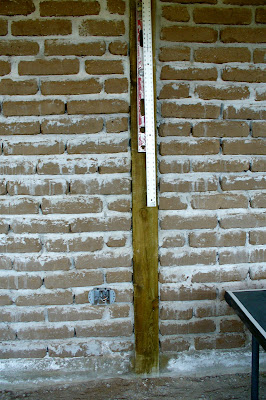 This shows one of the posts of the post and beam structure.
These semi-stabilized adobe have a small amount of asphalt emulsion
to protect them from water damage.
When buying adobes from one of the suppliers of bricks
( as compared to making your own ) they have become the norm.
They are commonly laid up with a conventional cement mortar.
Of course the traditionalists have a hard time accepting the semi-stabilized
over the old way of just using adobe mud and straw in their bricks and mortar. 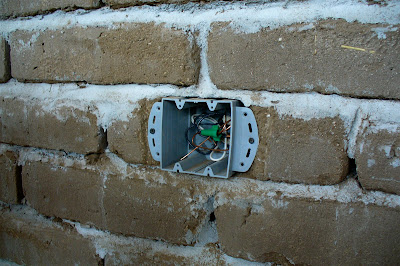 Remember the lines painted on the outside in the second photo?
The electrical lines are run straight through the wall
to the outside and then run along the wall.
The 2" of foam board on the ouside brings the stucco out far enough to satisfy
the code requirement for the electrical cable to be 2'' deep from the finished surface. 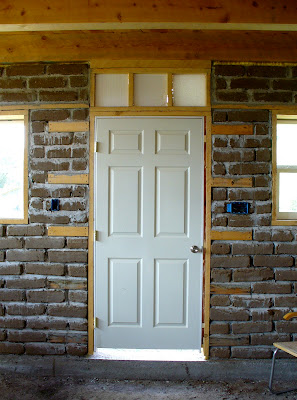 This gives a nice view of the " gringo blocks " ,
the wooden blocks set into the wall to attach the door frame to.
Posted by Ches at 8:43 AM